Am I Your Ancestor?
HAYOT Family Genealogy

NOTE: Interesting information on this couple can be found at boards.ancestry

"Myth: Gabriel's wife Genevieve Hayot died in 1713. Reality: Genevieve's mother died Nov 9, 1713. Genevieve lived at least until 1730 and perhaps much longer. Transactions that support this include: 21 Mar 1715, Genevieve attended baptism of Pierre Martin at Charlesbourg. 9 Mar 1718, Genevieve and Jean sold their Charlesbourg farm, Notary Basset dit Deslauriers. 28 July 1723 Genevieve was witness to baptism of Madeleine Berard at Sorel. 24 Jan 1730, notary Delafosse, Genevieve's children assign their inherited rights to a d'Autray farm to Genevieve. On that same 24 Jan 1730 by the same notary, "Genevieve Ayot, habitant, of Ile-St-Ignace, widow of Jean Turcot" sold a portion of land on Ile-St-Ignace. Thus Genevieve was living near or with her son Gabriel fils (junior) and many other relatives that lived at that time on Ile-St-Ignace in the Sorel Parish."

Details of the family tree of Geneviève appear below.

Québec Généalogie - Did you know? It is the old custom in French Canada (originating in Europe) to bury the dead in the church...Read MORE...


"Myth: Gabriel and Genevieve were married at Neuville in 1673. Reality: Their marriage contract was drawn by Quebec notary Romain Becquet. The first church in Neuville was constructed from 1679-1697. I have not seen any evidence of where or when their marriage ceremony took place."

PRDH shows that Gabriel Berard Lepine and Genevieve Ayotte entered into a marriage contract at an undetermined place in Quebec in 1673.


Events, Pictures and Documents Related to the Genealogy of Geneviève HAYOT

'(1) A small 'breaktrough' about Gabriel's last days comes from a document filed by Notary Barbel on behalf of Gabriel's widow, Genevieve Hayot, dated Dec 12, 1709. In her renunciation of debts, she notes that 'her deceased husband having died in the service of deceased Monsieur Hazeur about five years ago.' That would be Francois Hazeur who held the lease on the Tadoussac Region. Thus, it seems that Gabriel died while working at a post in the ...Read MORE... 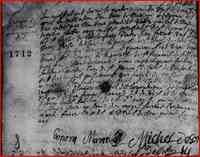 1724 Death
12 April 1724
Montréal, Québec, Canada (Sault-au-Récollet) (Côte-St-Michel) (Côte-St-Paul)
Misc
'The following is my best information on Genevieve Hayot's last years, with the summer of 1731 at Ile-St-Ignace being my estimate of when and where she died.

As noted earlier, on Jan 24, 1730, per record filed by Notary Delafosse, Genevieve Ayot [Hayot], habitant, of Ile St-Ignace, widow of Jean Turcote, sold a portion of land at Ile-Ste-Ignace to Jean Ride of Longeuil. Thus Genevieve was then living there on that island with or near her son ...Read MORE...

Genealogy research for Genevieve Hayot (on other sites)

Is Geneviève HAYOT YOUR Ancestor? Tell us more!

If you'd like to be contacted by others who are related to Geneviève HAYOT, leave a message here!
The comments you read here belong only to the person who posted them. We reserve the right to remove off-topic and inappropriate comments.