Am I Your Ancestor?
PELLETIER Family Genealogy

Nicolas was an immigrant to Canada, arriving by 1636.


Details of the family tree of Nicolas appear below.

Jeanne DEVOISY (ROUSSI)-- Date: abt. 1631 Place: , France
"In 1632, Nicolas marries Jeanne de Voissy (de Vouzy) (de Roussy), age 18, at Saint-Pierre Church in Gallardon (Galardon). Gallardon is located in the Beauce region of France, southwest of Paris between Chartres and the forest of Orléans"


Events, Pictures and Documents Related to the Genealogy of Nicolas PELLETIER

1596 Birth
4 June 1596
St-Pierre-St-Paul, Gallardon, Chartres, Beauce, France
1636-1645
'The family lives in Quebec City from 1636 to 1645. During this time, Nicolas is a 'charpentier menusier' or 'master carpenter', who specializes in the construction of houses. On one occasion, he along with another master carpenter, PierrePelletier, appraised the timber-frames of Louis Hébert's house, the first private home to be built outside the Québec fortification. He also constructed the steeple of Notre Dame du Quebec, and the next year,...Read MORE...

1649 Birth of Child
Nicolas PELLETIER dit MAROLLES was born 30 April 1649, Sillery, Québec, Québec, Canada (Mission Saint-Joseph-de-Sillery) (Saint-Colomb-de-Sillery)
1650
'In 1650, his family is attacked by 2 Iroquois indians, but Nicolas successfully defends his family and the homestead against the intruders.'

Source: www.geocities.com/ m_ruel/ biographies/ pelletier.html
1667 Census - Ste. Foy, Quebec
Nicolas Pelletier, 77 years, married
Jeanne Devourtais, 53 years, married
Nicolas Pelletier, 18 years
Pierre Quartier, domestique, 18 years
1669-1677
'In 1669, Nicolas rents out a large portion of his property to his son Jean for five years , and in 1670, he joins his son François, who now is known as Pelletier-dit-Ontaya (or Anthaïa, later Antaya), and his family in Saurel (Sorel). In 1677, at the latest, Nicolas and his son acquire property across the St-Lawrence River at Dautray (Seignneurie d'Autray), near what is now Berthierville.' 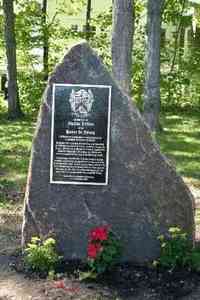 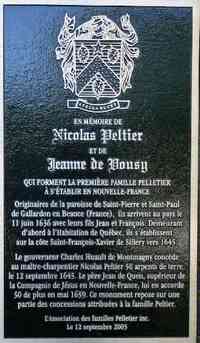 Genealogy research for Nicolas Pelletier (on other sites)

Is Nicolas PELLETIER YOUR Ancestor? Tell us more!

If you'd like to be contacted by others who are related to Nicolas PELLETIER, leave a message here!
The comments you read here belong only to the person who posted them. We reserve the right to remove off-topic and inappropriate comments.