Am I Your Ancestor?
ROOSEVELT Family Genealogy

Details of the family tree of Franklin appear below.


Events, Pictures and Documents Related to the Genealogy of Franklin Delano ROOSEVELT 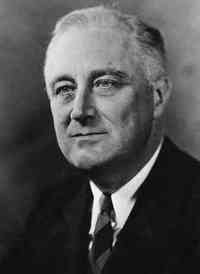 
1930 U.S. Census
1933 - March 4 - Franklin D. Roosevelt (1822-1945) becomes 32nd President of the United States - The only President to be elected four times.
In 1932, Roosevelt received the Democratic nomination for president and immediately launched a campaign that brought new spirit to a weary and discouraged nation. He defeated Hoover by a wide margin. His first term was characterized by an unfolding of the New Deal program, with greater benefits for labor, the farmers, and the unemployed, and the progressive estrangement of most of the business community. 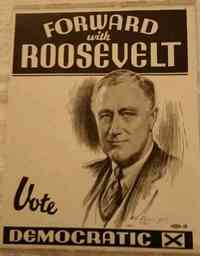 campaign poster
Artwork
1933 - April 5 - President of the United States Franklin D. Roosevelt declares a national emergency and issues Executive Order 6102, making it illegal for U.S. citizens to own substantial amounts of monetary gold or bullion.
Issues A New Call For Gold
Roosevelt Orders Return to Federal Reserve Banks of All Amounts over $100 Held by Individuals.
WOULD EASE EMBARGO
Treasury to Issue licenses Permitting Use of Gold in Necessary Transactions.

Washington, April 5 (AP) - President Roosevelt today ordered the return of all gold over $100 held by individuals to the federal reserve system before May 1.

In the same executive order, the President authorized the...Read MORE...

When he signed the Security bill into law yesterday, amid formal ceremony, he said it was a 'cornerstone in a structure which is being built but is by no means complete.'

The bill, which the President said...Read MORE...

The Daily Mail
Hagerstown, Maryland
August 15, 1935
1938 - January 3 – The March of Dimes is established by Franklin Delano Roosevelt.
'Franklin Delano Roosevelt, an adult victim of polio, founds the National Foundation for Infantile Paralysis, which he later renamed the March of Dimes Foundation, on this day in 1938. A predominantly childhood disease in the early 20th century, polio wreaked havoc among American children every summer. The virus, which affects the central nervous system, flourished in contaminated food and water and was easily transmitted. Those who survived the ...Read MORE... 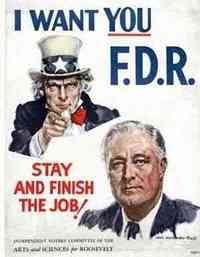 Genealogy research for Franklin Roosevelt (on other sites)

Is Franklin Delano ROOSEVELT YOUR Ancestor? Tell us more!

If you'd like to be contacted by others who are related to Franklin Delano ROOSEVELT, leave a message here!
The comments you read here belong only to the person who posted them. We reserve the right to remove off-topic and inappropriate comments.