Am I Your Ancestor?
TINDALL Family Genealogy

Details of the family tree of Sarah appear below.


Events, Pictures and Documents Related to the Genealogy of Sarah "Sally" TINDALL 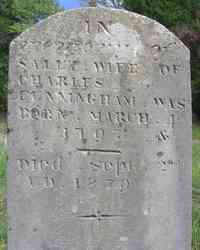 1879 Death
2 September 1879
Limestone County, Alabama, USA
Sarah Tindall, daughter of Larkin Asa Tindall and the former Martha Going, was born in Warren County, Georgia and soon moved to Chester, South Carolina. Her father served in the South Carolina Militia and was a veteran of the War of 1812.

Sadly in 1821, while Sarah was pregnant with Martha, William Porter died; leaving Sarah a widow expecting with two young boys. She shortly married Charles Cunningham, who would raise her children as his own. Sarah & Charles would have three children: Sarah Ann, Margaret Jane and Charles C. Cunningham.

Around 1838, Sarah & Charles emigrated to Limestone County, Alabama, with her parents and other families from the Chester area.

Genealogy research for Sarah Tindall (on other sites)

Is Sarah "Sally" TINDALL YOUR Ancestor? Tell us more!

If you'd like to be contacted by others who are related to Sarah "Sally" TINDALL, leave a message here!
The comments you read here belong only to the person who posted them. We reserve the right to remove off-topic and inappropriate comments.