Am I Your Ancestor?
ACHON Family Genealogy

Ozanne was a Fille à Marier , arriving in New France by 1655.

Details of the family tree of Ozanne appear below.

Québec Généalogie - Did you know? Have you ever wondered why there are often no very old tombstones in the cemteries of Canada/ New...Read MORE...

September 19, 1657 - Contract of marriage. Pierre has endowed his future wife the sum of one hundred livres, besides the customary dowry.


Events, Pictures and Documents Related to the Genealogy of Ozanne ACHON 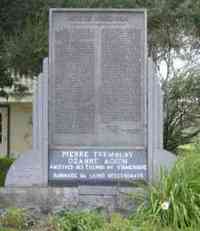 Monument dedicated to Pierre Tremblay and Ozanne Achon, ancestors of the Tremblays of America located in L'Ange-Gardien, Montmorency, QC, Canada 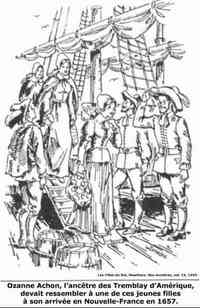 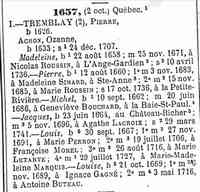 1657 Marriage / Partner
Ozanne ACHON and Pierre TREMBLAY 2 October 1657, Québec, Québec, Canada (Quebec City)
'Pierre Tremblay, ancestor to the largest french- canadian family was originally from Randonnay, in Perche Normandy. Only head of family with that name who came from France, he is the ancestor to all Tremblay families in America.

The first indication that we find in this country is in the registers of the parish of Notre-Dame-de-Québec dated October 2 1657 it is his wedding ceremony. He married Ozanne Achon, daughter of Jean Achon and Hélène...Read MORE...

1687 Death of Spouse/Partner
Pierre TREMBLAY died 14 April 1687, L'Ange-Gardien, Montmorency, Québec, Canada
1689
December 5, 1689, at the marriage of his daughter Louise, Ozanne Achon is called widow of the late Pierre Tremblay . It appears last on the marriage of his daughter Margaret, April 24, 1687. The autumn of 1688 was that of one great epidemic which caused almost 1,400 victims. His wife is also mentioned on the sick list of the Hotel-Dieu de Quebec June 20, 1689. Such mortality can explain without reporting the death of Pierre Tremblay.

Genealogy research for Ozanne Achon (on other sites)

Is Ozanne ACHON YOUR Ancestor? Tell us more!

If you'd like to be contacted by others who are related to Ozanne ACHON, leave a message here!
The comments you read here belong only to the person who posted them. We reserve the right to remove off-topic and inappropriate comments.