Am I Your Ancestor?
STRAPP Family Genealogy

Elizabeth STRAPP died abt. 1795 in Kanawha County, West Virginia, USA.
Details of the family tree of Elizabeth appear below.

America - Did you know? 1850 - The continuing debate whether territory gained in the Mexican War should be open to slavery...Read MORE...

The state of Virginia was named after England's Queen Elizabeth I. In the early 1600's, all of North America that was not Spanish or French was then called 'Virginia' in honor of 'The Virgin Queen,' and the earliest English colonial expeditions were sent by the Virginia Company of London. (statesymbolsusa.org)


Events, Pictures and Documents Related to the Genealogy of Elizabeth STRAPP 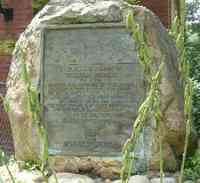 Genealogy research for Elizabeth Strapp (on other sites)

Is Elizabeth STRAPP YOUR Ancestor? Tell us more!

If you'd like to be contacted by others who are related to Elizabeth STRAPP, leave a message here!
The comments you read here belong only to the person who posted them. We reserve the right to remove off-topic and inappropriate comments.