"While living in Paris, Franklin hated having to change constantly from reading glasses to distance glasses. He directed an optician to cut two pairs of lenses horizontally in half and mount them in a new frame, with the reading lens at the bottom and the distance lens at the top - Voila, Bifocals!" (pbs.org)

"In a letter to George Wheatley, dated Passy, May, 23, 1783, Benjamin Franklin describes and illustrates a pair of bifocal glasses which had had made for his use by Dollond, the famous optician of London. Just why this useful invention of Franklin's was allowed to lapse into obscurity for many generations after its discovery, is not known. One one think that a practical optician such as Dollond would have grasped its value, and that its usefulness, so easily demonstrated, would have introduced it at once into popular vogue.

Franklin, following his invariable custom, did not patent his idea, so that there was no restriction on Dollond or any other optician who wished to make such lenses.

By Mr. Dollond's saying that my double spectacles can only serve particular, I doubt he has not bee rightly informed of their construction. I imagine it will be found pretty generally true that the same convexity of glass through which a man sees clearest and best at the distance proper for reading, is not the best for greater distances. I therefore had formerly two pair of spectacles, which I shifted occasionally, as in traveling I sometimes read and often wanted to regard the prospects. Finding this change troublesome, and not always sufficiently ready, I had the glasses cut, and half of each kind associated in the same circle, thus... By this means, as I wear my spectacles constantly, I have only to move my eyes up or down as I want to see distinctly far or near, the proper glasses being always ready. This I find more particularly convenient since my being in France, the glasses that sever me best at table to see what I eat, not being the best to see the faces of those on the other side of the table who speak to me; and when one's ears are not well accustomed to the sounds of a language, a sight of movements in the features of him that speaks to explain; so that I understand French better by the help of my spectacles. - The Works of Benjamin Franklin, Philadelphia, 1852 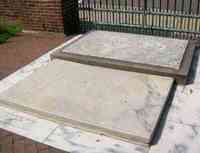