Am I Your Ancestor?
GUYON Family Genealogy

Jean was an immigrant to Canada, arriving by 1634.

Details of the family tree of Jean appear below.

Québec Généalogie - Did you know? Quebec’s forest covers more than 750,000 km2, which is the size of Sweden and Norway together! It...Read MORE...

Mathurine ROBIN-- Date: 12 June 1615 Place: Mortagne, Perche, France
"On June 12, 1615, Jean Guyon was married at Mortagne, the parish of Saint-Jean, to Mathurine Robin, probably the daughter of Eustache and Madeleine Avrard. The couple lived at Mortagne. However, a little more than five months after their wedding on November 30, the parishioners of Tourouvre requested from "Jehan (Jean) Froger and Jehan (Jean) Guyon, mason, living in the parish of Saint-Jean at Mortagne, a flight of stones to go up the first floor of the bell tower with a huisserie of white stones from La Louverye, at the bottom and entrance to this flight". A "husserie" is defined as a fixed part in wood, forming the arch and lintel of a door in a section of a wall. The pilgrim descendants visiting the church of Tourouvre can still admire the flight of stones and frame built by his Ancestor."


Events, Pictures and Documents Related to the Genealogy of Jean GUYON

1592 Birth
18 September 1592
, France
1592 Baptism
'JEAN GUYON WAS BAPTIZED AT SAINT-AUBIN DE TOUROUVRE ON FRIDAY, SEPTEMBER 18, 1592, A CENTURY AFTER THE DISCOVERY OF AMERICA. HIS GODFATHERS WERE JEAN COLLIN AND PIERRE DOLINET AND HIS GODMOTHER CATHERINE GODDIN. JEAN GREW UP AT TOUROUVRE, ATTENDED SCHOOL, LEARNED A TRADE AND PREPARED THE FOUNDATION FOR HIS HOME. ON MAY 18, 1614, AT THE AGE OF 22, HE LENT TO PANTALEON BIGOT, A LABORER AT AUTHEUIL, A SMALL VILLAGE TO THE SOUTHEAST OF TOUROUVRE...Read MORE...

Biography
DION - alteration of Guyon, a diminutive of Guy, which comes from the Germanic 'Wido' from the root 'wid' which means 'wood'. Or again, agglutination of the nickname given to one who comes from Ion or Yon, either D'Ion or D'Yon.

On 14 March 1634, at Mortagne, Guyon and his fellow-countryman Cloutier signed an undertaking with Robert Giffard. Guyon settled at Beauport that year with his wife and most of their children, of whom there were at least eight. When he received...Read MORE... 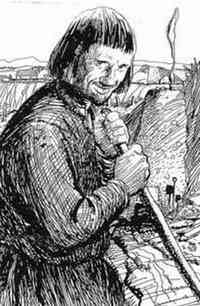 1631 Birth of Child
Denis GUYON was born 30 June 1631, Mortagne, Perche, France (Mortagne-au-Perche)
1634 Arrival in New France
'In particular, Giffard met with Jean Guyon, master mason and Zacharie Cloutier, master carpenter and presented his plans to them. Come with me to New France with each of your children for a period of three years: 'you will cut, clear and farm the lands and the woods of my seigneurie of Beauport'... This of Beauport on March 14, 1634. Guyon was promised 1,000 arpents of land with hunting and fishing rights. During the first three years, all of...Read MORE...

Genealogy research for Jean Guyon (on other sites)

Is Jean GUYON YOUR Ancestor? Tell us more!

If you'd like to be contacted by others who are related to Jean GUYON, leave a message here!
The comments you read here belong only to the person who posted them. We reserve the right to remove off-topic and inappropriate comments.