Am I Your Ancestor?
HUNTINGTON Family Genealogy

America - Did you know? February 4, 1789 - George Washington is unanimously elected president of the United States in a...Read MORE...


Events, Pictures and Documents Related to the Genealogy of Nathan HUNTINGTON

Vital Records of Norwich Connecticut, 1659-1848. (Online database. NewEnglandAncestors.org. New England Historic Genealogical Society, 2007.) Originally published as: Vital Records of Norwich, 1659-1848. Hartford, Society of colonial wars in the state of Connecticut, 1913
Bio
Nathan Huntington married Amy Brown, daughter of John Brown from Preston, Connecticut, on August 26, 1755 in Preston, Connecticut. 'He owned and lived on a farm on the east side of the Quinebaug, about nine miles north of Norwich, and one and one half south of Jewett City, Conn., from which place he moved in 1779, to Shaftsbury, Vermont, where he died November 14, 1794.' 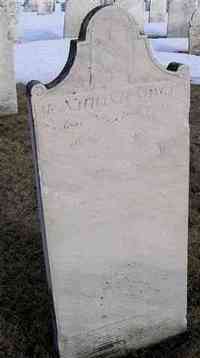 Photo Thanks to Lorry
findagrave.com

Genealogy research for Nathan Huntington (on other sites)

Is Nathan HUNTINGTON YOUR Ancestor? Tell us more!

If you'd like to be contacted by others who are related to Nathan HUNTINGTON, leave a message here!
The comments you read here belong only to the person who posted them. We reserve the right to remove off-topic and inappropriate comments.