Am I Your Ancestor?
TETREAU (TETREAULT) Family Genealogy

Louis was an immigrant to Canada, arriving by 1663.

Québec Généalogie - Did you know? In Quebec, kissing on the cheeks in the French manner is quite common. When close friends and...Read MORE...

He is the son of Mathurin Tetreau and Marie Bernard

She is the daughter of Joannis Laudeau and Mariae Aubert


"Noelle Landreau, remarried on 9 June 1663, to Louis Tetreau and had nine more children. After the death of Louis, who was buried at Champlain on 22 June 1699, Noelle lived at Montreal where most of her children had settled. From there she died on 24 September 1706."


Events, Pictures and Documents Related to the Genealogy of Louis TETREAU (TETREAULT)

FROM FRANCE TO AMERICA

'Louis Tétreau was the first Tétreau to go to New France (Canada). He was the son of Mathurin Tétreau and Marie Bernard and was born in 1634 in the parish of St-Martin-de-Ligugé, dioces e of Luçon, in the ancient province of Poitou, France. He arrived at Trois-Rivières, Québec , in 1662, as a domestic servant to the...Read MORE...

Birth
'Louis Tetreau, the son of Mathurin and of Marie Bernard, was born about 1635, in a small French locality called Louin whose parish church was under the protection of Saint-Martin. Today Louin is part of the canton of Saint-Loup-Lemaire and the arrondissement of Parthenay, in the department of Deux-Sevres... (Louis) appeared in the sidelights of our country's history when he was about 24 years old... Louis Tetreau's arrival at Trois-Rivieres did ...Read MORE... 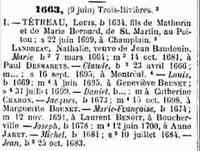 1674 Birth of Child
Daniel TETREAU (TETREAULT) was born 16 August 1674 , Trois-Rivières, Québec, Canada (Three Rivers)
1681 Census
'Louis and Noelle did not mind hard work. In 1681, they were at Champlain where they had 8 mouths to feed at their table. They owned 1 gun, 9 head of cattle, and had 18 arpents under cultivation...'

1695 Death of Child
Claude TETREAU (TETREAULT) died 16 September 1695, Montréal, Québec, Canada (Sault-au-Récollet) (Côte-St-Michel) (Côte-St-Paul)
1699 Death
'On 22 June 1699, in early summer, he yielded his place in the land of Champlain. A man so deserving had the right to only a few words in the parish registry: the names of the witnesses, Daniel and Joseph Tetreau and Louis Geoffroy.'

Genealogy research for Louis Tetreau (Tetreault) (on other sites)

Is Louis TETREAU (TETREAULT) YOUR Ancestor? Tell us more!

If you'd like to be contacted by others who are related to Louis TETREAU (TETREAULT), leave a message here!
The comments you read here belong only to the person who posted them. We reserve the right to remove off-topic and inappropriate comments.