Am I Your Ancestor?
ROCKWELL Family Genealogy

William was an immigrant to the United States, arriving by 1630.

William ROCKWELL died 15 May 1640 in East Windsor, New Haven Colony .
Details of the family tree of William appear below.


Events, Pictures and Documents Related to the Genealogy of William ROCKWELL

1590 Birth
6 February 1590
Fitzhead, Somerset, England
Bio
'William Rockwell, founder of the Rockwell family in America, was born on February 6, 1591, at Fitzhead, Somersetshire, England, the son of John Rockwell and Honor Newton, who were married at Fitzhead on July 19th, 1585. Besides William, John and Honor Rockwell had three other sons, Richard, John, and Roger, and a daughter, Joan.

According to the English history of the family, the Rockwells descend from Raoul or Ralph de Rocheville, a Norman...Read MORE...

CHURCH MEMBERSHIP: The claim has been made that William Rockwell was made deacon of the Dorchester congregation at the time of the sailing of the Mary & John early in 1630, but the evidence for this has not been found. Certainly Rockwell was performing the duties of a deacon in his earliest days in New...Read MORE... 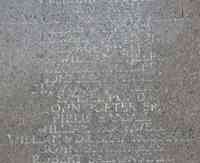 Genealogy research for William Rockwell (on other sites)

Is William ROCKWELL YOUR Ancestor? Tell us more!

If you'd like to be contacted by others who are related to William ROCKWELL, leave a message here!
The comments you read here belong only to the person who posted them. We reserve the right to remove off-topic and inappropriate comments.