Am I Your Ancestor?
HUNTINGTON Family Genealogy

Occupation: Justice of the Peace


Details of the family tree of Thomas appear below.


Events, Pictures and Documents Related to the Genealogy of Thomas HUNTINGTON

1664 Birth
18 March 1664
Norwich, Connecticut, USA (Norwichtown) (Yantic) (Greeneville) (Occum) (Taftville)
Biography
Thomas, born in Norwich, March 18, 1664, must have attained some
distinction, since he appears on the record toward the close of his life with that title, which in those days had the highest significance, Thomas Huntington, Esq.

He married, Feb. 10, 1686-7, Elizabeth, second daughter of Lieut. William and Elizabeth (Pratt) Backus, one of the most enterprising of the Norwich settlers. He was a professed Christian, and as appears from...Read MORE... 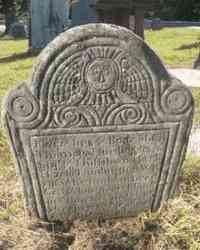 Genealogy research for Thomas Huntington (on other sites)

Is Thomas HUNTINGTON YOUR Ancestor? Tell us more!

If you'd like to be contacted by others who are related to Thomas HUNTINGTON, leave a message here!
The comments you read here belong only to the person who posted them. We reserve the right to remove off-topic and inappropriate comments.