Am I Your Ancestor?
GAUTHIER dit LAROSE Family Genealogy

René was an immigrant to Canada, arriving by 1669.


Details of the family tree of René appear below.

Québec Généalogie - Did you know? In France of the sixteenth and seventeenth centuries the chief officials of state, the seigneurs,...Read MORE...

Québec Généalogie - The Seigneurial System (1627 - 1854)
The seigneurial system was a form of land settlement modeled on the French feudal system. It began in New France in 1627 with the formation of the Compagnie des Cent-Associés (or Company of 100 Associates), which was initially responsible for handing out land grants and seigneurial rights. The land was divided into five by 15 kilometer plots, usually along major rivers like the St. Lawrence. They were then further subdivided into narrow, but long lots for settlement. These lots were usually long enough to be suitable for faming, and they provided everyone who lived on them with equal access to neighbouring farms and the river. There were three main groups of people who lived off the land in this system: Seigneurs, Habitants and Engagés

René GAUTHIER dit LAROSE was a habitant.
Habitants were usually farmers or labourers who were initially brought over from France to live on this land. They had to pay rent and taxes to the seigneur, though they co-owned the land with the seigneur, and even had to work entirely for the benefit of the seigneur a few days each year.

Source: Canada in the Making (www.canadiana.ca/citm/index_e.html)


Events, Pictures and Documents Related to the Genealogy of René GAUTHIER dit LAROSE 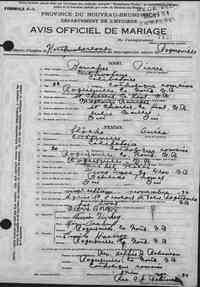 Genealogy research for Rene Gauthier Dit Larose (on other sites)

Is René GAUTHIER dit LAROSE YOUR Ancestor? Tell us more!

If you'd like to be contacted by others who are related to René GAUTHIER dit LAROSE, leave a message here!
The comments you read here belong only to the person who posted them. We reserve the right to remove off-topic and inappropriate comments.