Am I Your Ancestor?
LAPIERRE dit LAROCHE Family Genealogy

François was an immigrant to Canada, arriving by 1673.

François LAPIERRE dit LAROCHE died abt. 1707 in Acadia, Canada.
Details of the family tree of François appear below.


François Lapierre dit Laroche married Jeanne, daughter of René Rimbault and Anne-Marie ____, probably at Port-Royal in c1680. De Meulles found them at Minas in 1686. François was age 38, and Jeanne 24. They were living with three children, two sons and a daughter, ages 5, 3, and 1. De Meulles did not give the size of their holdings, but he did note that they owned a gun. Jeanne gave Laroche 10 children, including three sons who created families of their own.


Events, Pictures and Documents Related to the Genealogy of François LAPIERRE dit LAROCHE 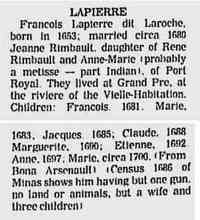 Francois is buried at:

Genealogy research for Francois Lapierre Dit Laroche (on other sites)

Is François LAPIERRE dit LAROCHE YOUR Ancestor? Tell us more!

If you'd like to be contacted by others who are related to François LAPIERRE dit LAROCHE, leave a message here!
The comments you read here belong only to the person who posted them. We reserve the right to remove off-topic and inappropriate comments.