Am I Your Ancestor?
MARGUERIE Family Genealogy

Marie-Marguerite was a Fille à Marier , arriving in New France by 1641.

Québec Généalogie - Did you know? On Sunday mornings, residents of New France attended Mass. The rest of the day was spent playing...Read MORE...


PRDH has records of the baptisms of several of their children, the first one in Trois-Rivieres in 1655


Events, Pictures and Documents Related to the Genealogy of Marie-Marguerite MARGUERIE

1620 Birth
12 September 1620
Rouen, France
Bio
'Marie-Marguerite Marguerie was born on September 12, 1620 in Le Havre, Rouen, Normandy, France; the daughter of Francois Marguerie and Marthe Romain. Her father was an early pioneer of Trois-Rivieres, where Marguerite married Jacques Hertel on August 23, 1641. Jacques was also born in La Havre, Rouen about 1620; the son of Nicolas Hertel and Nicole Mariot. Marguerite would have three children with him before his death on August 10,...Read MORE...

Nicolas dupuis - 24 domestique
The first census of New France (1666) www.afhs.ab.ca/data/census/1666
1668
Saint Jacques De Hertelet. (The half of the Fief) Vol. I, 2nd part, p. 599 - 1668 - Quentin Moral de Saint-Quentin, held it from his wife the widow, by the first marriage, of Jacques Hertel who had obtained the grant of the whole of the fief in 1644 from Messire Jacques de la Ferte, Abbe of Sainte-Marie Madeleine du Chateau d'Eu, 'one of the partners of the old Company.' 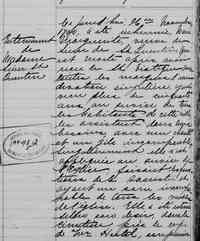 Genealogy research for Marie-Marguerite Marguerie (on other sites)

Is Marie-Marguerite MARGUERIE YOUR Ancestor? Tell us more!

If you'd like to be contacted by others who are related to Marie-Marguerite MARGUERIE, leave a message here!
The comments you read here belong only to the person who posted them. We reserve the right to remove off-topic and inappropriate comments.