"The earliest information obtained in relation to Moses Pengry is contained in a deed to him of real estate, dated the twelfth day of the first month 1641.

The early settlers of New England commenced the year March 25th, until 1760, so that the date of the deed would be by subsequent reckoning until 1752, April 5, or if we carry the calendar forward eleven days for new style April 16th. It is probable that Moses and Aaron Pengry were both of Ipswich as early as 1640, perhaps a few years earlier.

Moses m. Abigail d. of Robert Clement, who is said by Savage to have come from London to Haverhill, Mass., as early as 1642, bringing many children with him, no less than nine of whom are named in his will. Mr. Clement was representative of the town of Haverhill in the General Court of Mass. from 1647 to 1653, seven years.

In his will he names Moses Pingree husband of his daughter Abigail. Ipswich records show that in 1641, Moses Pengry was one of the list of commoners. In 1648, he was paid 4 shillings for killing a fox. The same year he subscribed three shillings toward Major Denison's salary. In 1650 Moses Pengry received a grant of land 40 acres beyond Mr. Hubbard's farm near to Wenham line. In 1653, Moses Pengry paid 6s for pasturing two cows on the north side of the river. In 1654 he was one of the selectmen. In 1656 Dea. Pengry is assessed by the selectmen 4 pounds 5s as a spinner. In 1659 Moses Pengry has liberty to fell two white oaks. In Felt's history of Ipswich it is represented on the 12th page that the earliest date in which Moses Pingrey's name appears on the records is 1642 and that of Aaron in 1648, but this is evidently a mistake.

On page 98 of Felt's History of Ipswich is the following:--

"Salt works 1652," "Granted to Moses Pengry a parcel of land by the ware house below Obadiah Wood's fence, to set up his salt pans and works and fence in his woods also liberty to fell wood out of the swamp near the town for his use." 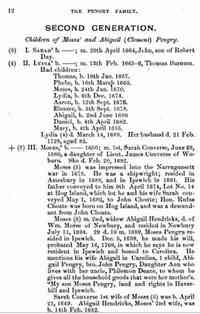 Title A genealogical record of the descendants of Moses Pengry, of Ipswich, Mass: so far as ascertai 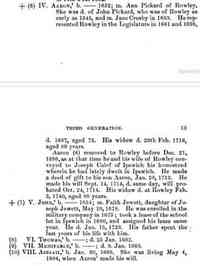 Title A genealogical record of the descendants of Moses Pengry, of Ipswich, Mass: so far as ascertai

Visit , England (United Kingdom)
Discover the people who lived there, the places they visited and the stories they shared.