BAINBRIDGE was formed February 16, 1791, as "Jericho." It was then a part of Tioga County and retained its name until April 15, 1814, when it received its present name. Its territory has since been diminished by taking off parts of Norwich and Oxford 1793, and of Greene in 1798 and 1799, and Afton in 1857. It lies upon the east border of the County, south of the center. The surface is a rolling upland, divided into two parts by the Susquehanna which flows through near the center. The course of the river is south-westerly after it enters the town, until it reaches the village, thence southerly until it passes beyond the border. The valley of the river is about a mile wide and is bordered by gradually sloping hillsides. The highest summits are elevated from 400 to 600 feet above the valleys. The soil upon the hills is a gravelly and shaly loam, and in the valleys a fine fertile clay loam and alluvium. Dairying is carried on to a considerable extent.

Bainbridge, (p. v.) situated on the Susquehanna River, near the center of the town, was incorporated April 21, 1821. It is a station on the Albany and Susquehanna Railroad, thirty five miles from Binghamton and one hundred and eight from Albany. It contains three churches, viz., Methodist, Presbyterian and Episcopal; a Baptist church is also about to be built. There are also two hotels, two grist mills, a foundry, two planing mills, fourteen dry goods and grocery stores, three harness shops, two carriage shops three blacksmith shops, one cabinet shop and furniture store, one drug store, two livery stables, two flour and feed stores, a newspaper printing office and about 850 inhabitants. It is in the midst of a thriving farming community and is rapidly increasing in wealth and population.

Bennettsville, (p. v.) situated on Bennett's Creek, in the southeast part, contains a store, a grist mill, a carriage shop and about twenty dwellings.

West Baimbridge is a hamlet in the north-west corner.

The territory included in this town was at first claimed by Robert Harper, under a grant from the Indians, but the State repudiated the title and granted a part of it to the "Vermont Sufferers." These were persons who had purchased land within the limits of the present State of Vermont, under titles from the State of New York, which claimed that territory. After years of difficulty the State of New York surrendered her claim and gave those persons whose claims in Vermont had become invalid, lands in the present town of Bainbridge. The State Gazetteer says the first settlements were commenced in 1785, but other authorities make it two years later. One of the first settlers was Reuben Kirby, on a farm now occupied by his son, Reuben Kirby. In 1789 Major Henry Evans came in and occupied what is known as "Major Evans' Square," which comprised three lots of 640 acres each in the east part of the town. The land was deeded to him as one of the Vermont Sufferers. His residence was on lot 80, the farm now owned by Paul C. Underwood. Jehial Evans, now living and to whom we are indebted, for much of the information given herewith, was born here in 1795 and removed into the village of Bainbridge in 1808. Ansel Evans, brothers of the last named, is now eighty years of age and lives on one of the farms included in the original purchase. The village of Bainbridge stands upon one of these lots and was sold by Major Evans to Col. Church, in 1793, for eighteen cents an acre. It is said that Stephen Stiles purchased and settled upon one of these lots at an earlier date, under a title from Robert Harper, but the title was disallowed and he removed. Samuel Bigsby settled upon lot 75 in 1789. The original deed, which has been preserved, was given by Gcvernor George Clinton and dated January 12th, 1789. Elnathan Bush with his children, Charles, Japhet, Joseph and Polly, started from Cooperstown, May 2d, 1786, and passed down the Susquehanna River in canoes to Stowell's Island, in the town of Afton. Charles Bush had served as a soldier in the Revolutionary War. Here they remained until April, 1790, when they removed to Bainbridge and settled on the farm now occupied by Joseph Bush, Esq., grandson of the old gentleman above named; Just in the rear of the old homestead, in an inclosure, is a plain marble slab with the following inscription: "In memory of Elnathan Bush who died May 15th, 1791, aged 63 years." His was the first death in the town and occurred nearly or quite a year previous to that of Mrs. Reuben Kirby, which is stated by the State Gazetteer to be the first. William Allison settled here in 1795, on the farm now occupied by William S. Sayre, Esq. Gould Bacon also came in the same. year and located near the river. He was an old bachelor and somewhat eccentric, as such men usually are. During his residence here a great freshet occurred in the month of August, the water rising to such a height as to completely surround his house. Not being sufficiently aquatic to remain in this situation he filled a satchel with provisions, took his gun and fled to a neighboring tree for security. Unfortunately he soon lost his satchel and was compelled to subsist upon pumpkins which were brought down by the flood from the adjacent fields. This event has since been known as the "Pumpkin Freshet." Among the other early settlers were William Gutherie, Abraham Fuller, Heath Kelsey, Eben and Joseph Landers, James Graham, Samuel Nourse, John Campbell, better known throughout the town as "Scotch" Campbell, from his birth place, Asahel Bigsby, Deacon Israel Smith, Reuben Bump, Jared Redfield, Simeon Smith, David Hitchcock, James B. Nichols, R. W. Juliand, Edward, Noble, Cesar and Jervis Price, the last named from New Miliford, Conn., Richard L. and Frederic H. Dazang, David Sears, Richard L. Lawrence, Solomon Warner, Moses Stockwell, Abel Conant, Redben Beals, Thomas, Robert, Samuel, Henry and Matt Pearsoll, Peter Betts, Jabez S. Fitch, Charles Curtis, Ezra Hill,. Samuel Banks, Aaron Myers, Perry Peckham, Joshua Mercereau, Hiram Dennison, John Y. Bennett, John Thompson, Timothy Davis, Eli Seeley, Orange Benton, Nathaniel and Thomas Humphrey, Abner Searles, Jacob, Thomas and James Ireland, William, Charles, Samuel and Daniel Lyon, Seth Johnson and John Nichols.

William Bush was the first male and Relief Landers the first female child born in the town, the latter in March 1791. The first marriage was that of Charles Bush and Joan Harrington in 1794. The first inn was kept by William Gutherie, on the place now owned by Philo Kirby, about two miles south of the village. Phineas and Reuben Bennett erected a grist-mill on Bennett's Creek in 1789. The State Gazetteer says: The first church (Pres.) was formed about 1790, by Rev. William Stone. Hotchkin's History says, "A Congregational church was organized, probably as early as 1797 or 1798. Within a year or two from the period of the organization of the church, Rev. Joel Chapin was ordained to the work of the ministry, and at the same time, it is believed, installed pastor of the church." It appears that Mr. Chapin labored with this church for several years. The authority quoted above, states that this was probably the first ordination of a Congregational minister in the territory whose history is given by Mr. Hotehkin. The first school house was erected about the same time as the organization of the church, and at the village. The land for the school house, church, burying ground and public green was given for these purposes by Benjamin S. Carpenter.

Visit Bainbridge, New York, USA (Bennettsville)
Discover the people who lived there, the places they visited and the stories they shared. 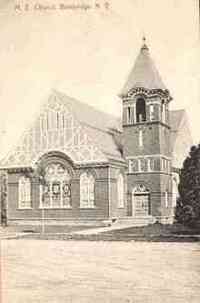