New York, (AP) - Two persons burned to death and 34 were overcome or injured yesterday in a nine-alarm, $2,000,000 blaze which engulfed Staten Island's St. George ferry terminal shortly after it had been emptied of 500 passengers.

The dead were MRS. CORNELIUS WHITE, a ticket agent, and Fireman HAROLD CLENDENING, 59. Both lived on Staten Island.

Within five minutes the 40-year-old rambling wooden structure was a mass of flames, fed by paint, oil and grease in a basement shop. Giant billows of white smoke poured from the building.

CLENDENING was trapped by the fast-spreading flames when he tried to rescue MRS. WHITE.

Fourteen persons were injured and 20 others, mostly firemen, police and ferry employes, were overcome by smoke and heat. It was two hours before the fire was brought under control.

Five hundred passengers had just boarded a Manhattan-bound ferry and the station was nearly empty when the first cry of "fire" echoed thru the high-ceilinged, three and a half story ferry house.

Two other ferries, idling in their slips, had time to pull away before the ferryhouse and all four slips were destroyed.

The flames spread a block down-shore to the main platform of the Staten Island Rapid Transit Railroad. Twenty coaches were destroyed.
The thousands of commuters who daily use the Staten Island ferries from Manhattan, the largest ferry boats in service in the city, were forced to seek other means of transportation home.

Coast guards and fire department boats fought the blaze from Upper New York bay while fire apparatus from Brooklyn, Manhattan and Richmond Boros responded to nine alarms sounded within half an hour after the fire broke out.

Manhattan fire companies raced thru Holland tunnel to the Jersey side of the Hudson River and reached the scene via the Bayonne-Staten Island bridge.

Other fire fighting equipment moved to the blaze by the electric ferry from Brooklyn.

Meanwhile, dense columns of smoke and tongues of flame over the Lower Manhattan horizon attracted thousands of pedestrians and motorists, snarling traffic.

Police loudspeakers were set up at the Battery and South Ferry districts to control crowds.

One hundred telephones in two Staten Island exchanges were out of order due to a burned out cable, the New York Telephone Co. said.

Visit Staten Island, New York, USA
Discover the people who lived there, the places they visited and the stories they shared. 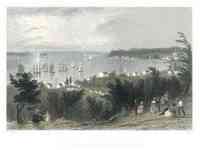