1885 - A WEST SHORE TRAIN SINKS IN A SWAMP NEAR LITTLE FALLS. The Wife Of Assemblyman CHAS. PRATT of Rochester Killed - Three Other Passengers Seriously Injured.

A terrible and fatal accident occurred on the West Shore railroad shortly after midnight Monday, just above what is called "the Big Branch," situated 1 1/ 4 miles west of Little Falls station and near where the passenger and freight trains collided a few weeks ago. The only cause known for the accident is a washout, which has done its terrible work well.

The Train Sinks Into A Ditch.
The accident happened to through passenger train No. 57, westward bound, which left Coeymans at 10:15 last night drawn by engine No. 42. It was running at a moderate rate of speed. Upon reaching the point mentioned all except the locomotive suddenly sunk to the ditch below, some 25 or 30 feet, into a swamp. The tender was completely turned around and headed east and three coaches and sleepers jumped or rather telescoped the tender, one sleeper striking about in the centre and lodged there. The other sleepers and coaches were hurled into the ditch.

Assemblyman PRATT'S Wife Killed.
In the coach that landed on the tender were four persons: Assemblyman CHAS. R. PRATT, and wife, of Rochester; U. L. UPSON and another aged gentleman whose name has not yet been ascertained. MR. PRATT, MR. UPSON and the aged man escaped with slight bruises, MR. PRATT being injured the most. MRS. PRATT was not so fortunate in escaping, and was almost instantly killed.

Her Last Moments On Earth.
It was necessary to cut out the side of the car to release MRS. PRATT. She lived but a few minutes after being taken from the wreck. These last moments of her life she occupied in talking to her husband. The body was conveyed to the residence of MRS. FOX, a short distance from the scene of the accident. MRS. PRATT was 35 years of age.

Damage To The Train.
The locomotive and baggage car kept the track pretty well, and after breaking loose from the train the locomotive ran about 150 feet before stopping. The sleeper which MRS. PRATT occupied is a total wreck. The other coaches and sleepers are badly smashed and piled on top of each other.

The Injured Parties.
MR. PRATT is a resident of Rochester, New York., and a contractor. He was last week re-elected a member of the assembly. MR. UPSON is from Buffalo. The aged gentleman is somewhat bruised, but not seriously. The remainder of the passengers and trainmen escaped unhurt.

Visit Little Falls, New York, USA
Discover the people who lived there, the places they visited and the stories they shared. 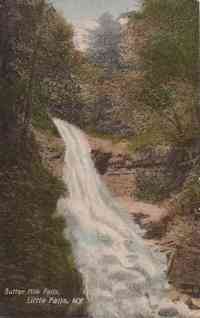