Ulric E. Duval, 33-year-old motion picture operator of Worcester and step-son of Mayor Joseph N. Carriere, was killed in an automobile accident at Union, Conn., yesterday afternoon when his roadster overturned, presumably after a front tire had blown out.

Mr. Duval was pinned beneath the machine and his spine was fractured.
There were no witnesses of the accident.

Investigations made after the discovery of the wreck led to the belief that it was caused by the blowout on a curve.

Mr. Duval was the son of Mrs. Carriere and he was a frequent visitor at the home of the mayor. He had many friends and acquaintances in this city who were shocked to hear of his death.

Mr. Duval was a native of Worcester, the son of Edmund and Josephine (Moge) Duval. He was educated at Notre Dame parochial school, High School of Commerce and Assumption college.

Besides his mother he is survived by a grandmother, Mrs. Bruno Duval, Leominster, a step-sister, Miss Clarisse Carriere, of this city, two aunts, Miss Hera Moge and Miss A? Moge, 72 Russell street, Worcester with whom he made his home.

The funeral will be from the home Thursday forenoon with services at Nortre Dame church.

Mayor Carriere, who was in New York yesterday, was reached by telegram while he was on his way to Fitchburg. He arrived at the home of his step-son in Worcester this forenoon.

Visit Union, Connecticut, USA
Discover the people who lived there, the places they visited and the stories they shared. 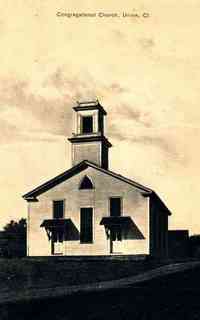