Am I Your Ancestor?
GRANNIS Family Genealogy

Edward was an immigrant to the United States, arriving by 1649.


Details of the family tree of Edward appear below.

VITAL RECORDS OF HARTFORD, WINDSOR AND FAIRFIELD, CONNECTICUT, 1631 TO 1691. (ONLINE DATABASE. NEWENGLANDANCESTORS.ORG. NEW ENGLAND HISTORIC GENEALOGICAL SOCIETY, 2009.) ORIGINALLY PUBLISHED AS: BIRTHS, MARRIAGES, AND DEATHS RETURNED FROM HARTFORD, WINDSOR, AND FAIRFIELD, AND ENTERED IN THE EARLY LAND RECORDS OF THE COLONY OF CONNECTICUT : VOLUMES I AND II OF LAND RECORDS AND NO. D OF COLONIAL DEEDS, TRANSCRIBED AND EDITED BY EDWIN STANLEY WELLES. HARTFORD, CONN.: CASE, LOCKWOOD & BRAINARD CO, 1898.


Events, Pictures and Documents Related to the Genealogy of Edward GRANNIS

NOTE: MUCH MORE IN THIS BOOK ABOUT THIS FAMILY
New Haven, Connecticut - 1649
'Edward Grannis... first appears in colonial records in New Haven when, on October 2, 1649, the New Haven General Court fined him '18 d. for want of Worme, Scourer and Flints.' At the time, all residents were required to bear arms and provide themselves with 'a good serviceable gun and four of five good flints fitted for every firelock piece, all in good order and ready for any sudden occasion, service or view.' Edward Grannis, at about 20 years ...Read MORE...

New Haven, Connecticut - 1652
'Grannis' name appears again in March 1, 1652, when, as an employee of miller John Wakefield, he was witness in a case against Thomas Langden, who was accused of beating and threatening to kill his wife, and of killing and eating three hogs owned by Rev. Peter Prudden.'

1656 Birth of Child
Joseph GRANNIS was born 31 March 1656, Hartford, Connecticut, USA
Hartford, Connecticut - 1666
'Family tradition holds that Edward Grannis was of Norman origin and that he had been baptized in the Established Church in England. Evidence of this is in Hartford when on November 22, 1666, Edward Grannis joined other, former members of the Anglican (Established) Church, and asked for permission to become members of the First Church of Hartford, a Puritan congregation. This Norman view coincides with another family tradition that holds the...Read MORE...

1676 Birth of Child
Joseph GRANNIS was born 12 March 1676, Watertown, Connecticut, USA (Oakville)
New Haven, Connecticut - 1677
'In the wake of King Philp's War, the Grannis family left Hadley in 1677 and returned to New Haven where they took up residence in a section of North Haven called Montowese.'

1688 Birth of Child
Anne GRANNIS was born 3 June 1688, New Haven, Connecticut, USA (Westville)
New Haven, Connecticut - 1696
'...on June 28, 1696 were admitted as members of the First Church of New Haven. New Haven records identifyy Eward as a 'cordwainer,' a tanner and worker of leather. Hannah died in North Haven in 1711 and was buried in Montowese Cemetery, where a small red sandstone marker reads: HG 1711. Edward Grannis died in New Haven December 10, 1719 and is buried in Montowese Cemetery, where a red sandstone marker reads: EG Dec 10 1719' 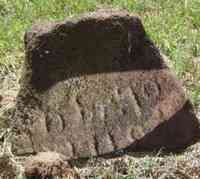 Genealogy research for Edward Grannis (on other sites)

Is Edward GRANNIS YOUR Ancestor? Tell us more!

If you'd like to be contacted by others who are related to Edward GRANNIS, leave a message here!
The comments you read here belong only to the person who posted them. We reserve the right to remove off-topic and inappropriate comments.