Am I Your Ancestor?
CORMIER Family Genealogy

Robert was an immigrant, arriving by 1644.

"Robert Cormier, a master ship's carpenter born probably at La Rochelle, France, in c1610, perhaps the son of Abraham Cormier of Dieppe and Catherine LeMayne, sailed to Acadia in early 1644 aboard Le Petit St.-Pierre, so he was among the earliest settlers in the colony. He reached Fort St.-Pierre on Cape Breton Island in late spring of that year with his wife Marie Péraud and two young sons, Thomas and Jean. Back in La Rochelle, Robert had signed an indenture with associates of Acadian proprietor Nicolas Denys, who owned Fort St.-Pierre. Cormier's indenture with Denys called for three years service, but he stayed on at Fort St.-Pierre, now St. Peter's, Nova Scotia, until 1650, when he took his family to Port-Royal. Sometime in the 1650s, when trouble again shook the colony, Robert, his wife, and their younger son probably returned to La Rochelle. But son Thomas, who turned 18 in 1654, the year the English seized Port-Royal again, remained in the colony despite the troubles erupting all around him. He probably was a ship's carpenter like his father and worked at the trade in the colony's major settlement. "


Events, Pictures and Documents Related to the Genealogy of Robert CORMIER 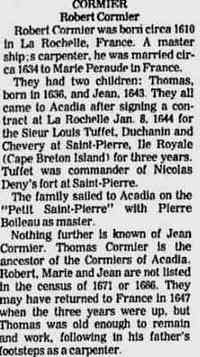 Acadian Ancestors, The Lewiston Daily Sun, Lewiston, Maine, February 19, 1983
Robert Cormier
'L'espirit de retour (the spirit of return) proved strong for the majority of French migrants, and fewer than one in ten remained in l'Acadie. But those who stayed became the founding generation of the Acadians: ... Robert Cormier and his wife Marie Peraud...'

Robert Cormier, master carpenter, and his wife, Marie Piraude, both
living in LaRochelle France, signed a contract in ...Read MORE...

Genealogy research for Robert Cormier (on other sites)

Is Robert CORMIER YOUR Ancestor? Tell us more!

If you'd like to be contacted by others who are related to Robert CORMIER, leave a message here!
The comments you read here belong only to the person who posted them. We reserve the right to remove off-topic and inappropriate comments.