from Rootsweb.com -- "He was the son of Pierre Simard of Puymoyen, Angouleme, Charentes, France. Noel departed from France for Québec on June 21, 1657."

"Noël Simard originated from Puymoyen in Angoumois, France and settled on the coast of Beaupré with his father in 1658.

Three years later, he married Marie-Madeleine Racine, daughter of a pioneer of the coast of Beaupré.

Father and son settled at Chateau-Richer, the first using his skills as mason and the later, cultivating the land. From 1667 they owned thirteen arpents of cleared land and had four cattle in their barn. Fourteen years later, at the 1681 census, these numbers had grown to thirty arpents and twenty horned animals quite a success. That same year, Noël Simard went to settle at Baie-St-Paul with a part of his family. One of the pioneers of that area, he died in 1715.

All of the Simards in Canada are descendants of Noël Simard. That family is today one of the largest in the country. We find them almost everywhere but mainly in the counties of Charlevoix, Saguenay, Chicoutimi, Lac-St-Jean and Roberval. " 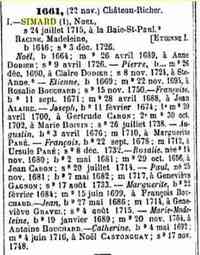 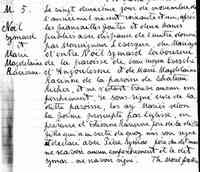 Visit , France
Discover the people who lived there, the places they visited and the stories they shared.