"Nathaniel Baldwin came [to Oakland County] only a year after the Grahams, and settled near by. He taught school in a log schoolhouse which stood where the stone balacksmith shop now stands.

While still a lad he enlisted in the sixth regiment of Connecticut under Colonel Parsons. This regiment was organized at the first call for troops and recruited from New London, Hartford, and Middlesex counties. He remained on duty at New Longdon until July 17, 1775, when they were orderd to the Boston camps, where they remained untitl discharged, December 10, 1775."

"After the war, Mr. Baldwin married Susanna Sherman, the niece of Roger Sherman, one of the signers of the Declaration of Independence."

"The track of land they occupied lies about two miles south of Rochester, where the Crout farm now is located." 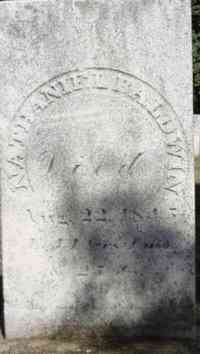 Visit Goshen, Connecticut, USA
Discover the people who lived there, the places they visited and the stories they shared.