Jefferson Ashley, was a son of Deacon Abraham Ashley, and grandson of William Ashley. Their home was in Freetown, where they owned land. Abraham Ashley married (first) Phebe Taber and (second) Hannah Crapo.

“Representative men and old families of southeastern Massachusetts : containing historical sketches of prominent and representative citizens and genealogical records of many of the old families VOL. 2” Beers and Co., J. H. (2012-10-11). 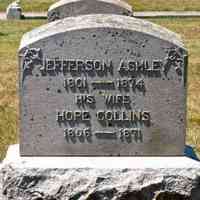