New York, April 23. - A horrible accident is reported on the Long Island Railroad. The train which left Hunter's Point at 10 o'clock this morning, when about one mile east of Jamaica, ran off the track when going at the rate of twenty miles an hour. Six passengers were instantly killed, fifteen others seriously injured, two or three mortally. Every person in the rear car was either killed or injured.

Among the killed were two women and an infant. The cause of the accident was a broken rail. Among the passengers killed are WM. C. RUSHMORE, President of the Atlantic Bank of Brooklyn, and P. SHANAHAN, a railroad contractor.

Among the injured is MR. CRAIG, of this city, badly cut about the head, and hip dislocated.

Another account says there were fifteen passengers in the last car which was broken to splinters, and eight passengers killed. The brakeman, GEO. VAN NOSTRAND, was killed, as was a child named ADAMS. The parents of the latter were terribly injured and cannot survive.

The killed and wounded were removed to Minala and Jamaica, and everything done to alleviate the sufferings of the injured.

Visit Jamaica, New York, USA
Discover the people who lived there, the places they visited and the stories they shared. 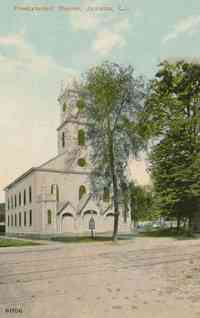