ROLLET, MARIE, wife of Louis Hébert, Canada’s first settler; d. 1649 at Quebec.
In 1617, with her husband and three children she came from Paris to Quebec, where she found starvation, sickness, and threats of Indian attack. A year after their arrival, says Sagard, the first marriage solemnized in Canada with the rites of the church took place, that of their daughter Anne and Étienne Jonquet. Anne died in childbirth the following year, but there is no record of the child.

Marie Rollet aided her husband in caring for the sick and shared his interest in the natives, concerning herself especially with the education of Indian children. In 1627, at the baptism of Chomina’s son, Naneogauchit, which the priests were striving to make an impressive occasion, she fed a crowd of visiting Indians from her big brewing kettle. Her name appears often as godmother at the baptism of converted natives.
Two years after the death of Louis Hébert, on 16 May 1629, she married Guillaume Hubou. After seeking Champlain’s advice, she and her family (i.e., her second husband, her 15-year-old son Guillaume, and her daughter and son-in-law Guillaume Couillard) remained in Quebec during the English occupation and kept alive among the neighbouring Indians the memory of French friendship. After the return of the French in 1632, her house became the home of Indian girls given to the Jesuits for training. She died in 1649, leaving her husband, her one surviving child, Guillemette Hébert, and a number of grandchildren. She was buried at Quebec on 27 May 1649. 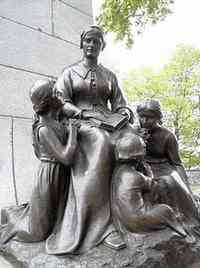 Visit Paris, France
Discover the people who lived there, the places they visited and the stories they shared.