CLOUTIER, ZACHARIE, master carpenter, pioneer at Beauport, originally from Saint-Jean-Baptiste de Mortagne in Perche; b. c. 1590; d. 17 Sept. 1677 at Château-Richer and was buried there the following day.

Having married Xainte Dupont on 18 July 1616, Cloutier entered into an undertaking at Mortagne with Robert Giffard, the seigneur of Beauport, on 14 March 1634; by the terms of this agreement he was to come to Canada that same year with his fellow-countryman Jean Guyon Du Buisson, senior, and he received at the same time the grant of an arriere-fief at Beauport. The two settlers took formal possession of their lands on 3 Feb. 1637. The previous year, if not before, their families had joined them in Canada, for the two households figure in the marriage contract of Robert Drouin and Anne Cloutier on 27 July 1636.

Cloutier’s holding, the fief of La Clouterie (or La Cloutièrerie), brought him into conflict with his neighbour Guyon and with Giffard, his seigneur. He sold it to Nicolas Dupont* de Neuville on 20 Dec. 1670 in order to go and settle at Château-Richer, where he had already received a grant of land from Governor Jean de Lauson on 15 July 1652. Zacharie Cloutier brought up five children; he appears to be the ancestor of all the Cloutiers in Canada. He signed with a mark shaped like an axe. 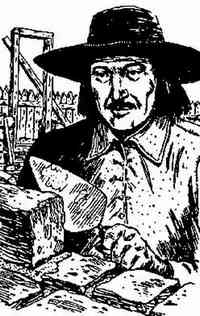 Visit Mortagne, Perche, France (Mortagne-au-Perche)
Discover the people who lived there, the places they visited and the stories they shared.