FRANKLIN PIERCE, the fourteenth President of the United States, was born in Hillsborough, N. H., November 23, 1804. His father was a Revolutionary soldier, who with his own strong arm hewed out a home in the wilderness. He was a man of in flexible integrity, of strong, though uncultivated, mind, and was an uncompromising Democrat. The mother of Franklin Pierce was all that a son could desire-an intelligent, prudent, affectionate, Christian woman.

Franklin, who was the sixth of eight children, was a remarkably bright and handsome boy, generous, warm-hearted and brave. He won alike the love of old and young. The boys on the play-ground loved him. His teachers loved him. The neighbors looked upon him with pride and affection. He was by instinct a gentleman, always speaking kind words, and doing kind deeds, with a peculiar, unstudied tact which taught him what was agreeable. Without developing any precocity of genius, or any unnatural devotion to books, he was a good scholar, and in body and mind a finely developed boy.

When sixteen years of age, in the year 1820, he entered Bowdoin College, at Brunswick, Me. He was one of the most popular young men in the college. The purity of his moral character, the unvarying courtesy of his demeanor, his rank as a scholar, and genial nature, rendered him a universal favorite. There was something peculiarly winning in his address, and it was evidently not in the slightest degree studied-it was the simple outgushing of his own magnanimous and loving nature.

Upon graduating, in the year 1824, Franklin Pierce commenced the study of law in the office of Judge Woodbury, one of the most distinguished lawyers of the State, and a man of great private worth. The eminent social qualities of the young lawyer, his father's promillence as a public man, and the brilliant political career into which Judge Woodbury was entering, all tended to entice Mr. Pierce into the fascinating yet perilous path of political life. With all the ardor of his nature he espoused the cause of Gen. Jackson for the Presidency. He commenced the practice of law in Hilisborough, and was soon elected to represent the town in the State Legislature. Here he served for four years. The last two years he was chosen Speaker of the House by a very large vote.

In 1833, at the age of twenty-nine, he was elected a member of Congress. In 1837, being then but thirty-three years old, he was elected to the Senate, taking his seat just as Mr. Van Buren commenced his administration. He was the youngest member in the Senate. In the year 1834, he married Miss Jane Means Appleton, a lady of rare beauty and accomplishments, and one admirably fitted to adorn every station with which her husband was honored. Of the three sons who were born to them, all now sleep with their parents in the grave.

In the year 1838, Mr. Pierce, with growing fame and increasing business as a lawyer, took up his residence in Concord, the capital of New Hampshire. President Polk, upon his accession to office, appointed Mr. Pierce Attorney-General of the United States; but the offer was declined in consequence of numerous professional engagements at home, and the precarious state of Mrs. Pierce's health. He also, about the same time, declined the nomination for Governor by the Democratic party. The war with Mexico called Mr. Pierce into the army. Receiving the appointment of Brigadier-General, he embarked with a portion of his troops at Newport, R. I., on the 27th of May, 1847. He took an important part in this war, proving himself a brave and true soldier.

When Gen. Pierce reached his home in his native State, he was received enthusiastically by the advocates of the Mexican War, and coldly by his opponents. He resumed the practice of his profession, very frequently taking an active part in political questions, giving his cordial support to the pro-slavery wing of the Democratic party. The compromise measures met cordially with his approval, and he strenuously advocated the enforcement of the infamous Fugitive Slave Law, which so shocked the religious sensibilities of the North. He thus became distinguished as a "Northern man with Southern principles." The strong partisans of slavery in the South consequently regarded him as a man whom they could safely trust in office to carry out their plans.

On the 12th of June, 1852, the Democratic convention met in Baltimore to nominate a candidate for the Presidency. For four days they continued in session, and in thirty-five ballotings no one had obtained a two-thirds vote. Not a vote thus far had been thrown for Gen. Pierce. Then the Virginia delegation brought forward his name. There were fourteen more ballotings, during which Gen. Pierce constantly gained strength, until, at the forty-ninth ballot, he received two hundred and eighty-two votes, and all other candidates eleven. Gen. Winfield Scott was the Whig candidate. Gen. Pierce was chosen with great unanimity. Only four States-Vermont, Massachusetts, Kentucky and Tennessee-cast their electoral votes against him. Gen. Franklin Pierce was therefore inaugurated President of the United States on the 4th of March, 1853.

His administration proved one of the most stormy our country had ever experienced. The controversy between slavery and freedom was then approaching its culminating point. It became evident that there was to be an irrepressible conflict between them, and that this nation could not long exist "half slave and half free." President Pierce, during the whole of his administration, did everything he could to conciliate the South; but it was all in vain. The conflict every year grew more violent, and threats of the dissolution of the Union were borne to the North on every Southern breeze.

Such was the condition of affairs when President Pierce approached the close of his fouryears term of office. The North had become thoroughly alienated from him. The anti-slavery sentiment, goaded by great outrages, had been rapidly increasing; all the intellectual ability and social worth of President Pierce were forgotten in deep reprehension of his administrative acts. The slaveholders of the South also, unmindful of the fidelity with which he had advocated those measures of Government which they approved, and perhaps feeling that he had rendered himself so unpopular as no longer to be able to acceptably serve them, ungratefully dropped him, and nominated James Buchanan to succeed him.

On the 4th of March, 1857, President Pierce returned to his home in Concord, His three children were all dead, his last surviving child having been killed before his eyes in a railroad accident; and his wife, one of the most estimable and accomplished of ladies, was rapidly sinking in consumption. The hour of dreadful gloom soon came, and he was left alone in the world without wife or child.

When the terrible Rebellion burst forth which divided our country into two parties, and two only, Mr. Pierce remained steadfast in the principles which he had always cherished, and gave his sympathies to that pro-slavery party with which he had ever been allied. He declined to do anything, either by voice or pen, to strengthen the hand of the National Government. He continued to reside in Concord until the time of his death, which occurred in October, 1869. He was one of the most genial and social of men, an honored communicant of the Episcopal Church, and one of the kindest of neighbors. Generous to a fault, he contributed liberally toward the alleviation of suffering and want, and many of his towns-people were often gladdened by his material bounty. 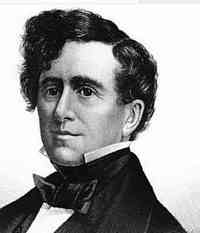 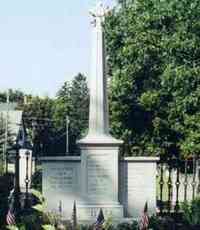 Visit , New Hampshire, USA
Discover the people who lived there, the places they visited and the stories they shared.