The Parish of St. Michel extends over the half of the seigniory fronting the St. Lawrence; it is 1 1/ 2 league in width, and 2 leagues in depth. The farms in this parish are generally 3 arpents in front by 40 in depth. Correctly speaking, there are no large proprietors, for the individuals, who sometimes acquire the property of their neighbours or other properties in the parish, purchase them for the sake of settling their children and not with a view of farming on a larger scale; these acquisitions, therefore, are never permanent. All the lands are conceded, and about seven-ninths of the parish previously to 1759. These concessions, with a few exceptions, were granted on condition of paying a quit-rent of 2 or 3 sols, fines on alienation, and a perpetual annual rent of one sol for each superficial arpent, and also with a clause compelling the grantees to grind at the seignior's mill the corn required for his family and for farming purposes; the seignior, moreover, reserved to him self, in the event of a change of property, the right of retraite and that of taking as much timber off the conceded lands as might be required, hereafter, for the building of the mill, the seignorial manor-house and the parochial church, and also for their perpetual maintenance and repair: there is also a farther stipulation for the annual payment of some capons and a certain tax on all fish caught in the St. Lawrence; but the two last conditions are commuted for a moderate rent in money.

1832 - Bellechasse county, bounded N.E. by the co. of l'Islet; S.W. by the N.E. boundary lines of the SS. of Lauzon and Jolliet and of Frampton, Cranbourne and Watford, and thence by a line prolonged S.E. to the S. boundary of the province; N.W. by the R. St. Lawrence, and it includes all the islands in that river nearest to the co. and in the whole or in part fronting it; and on the S.E. by the S. boundary of the province. It comprise the seigniories of Berthier, St. Vallier, St. Michel, Beaumont and its augmentation, la Martiniere, Montapeine, Vincennes, St. Gervais and Livaudiere, and the townships of Buckland and Standon... it contains 581 sq. m. and seven parishes.. The surface is uneven and in many places, particularly in the rear, mountainous; the soil nevertheless is susceptible of cultivation and produces abundance of good timber. - It is watered by the rivers du Sud, Boyer, Bellechasse, and their several branches, besides numerous other streams that fall into the St. Lawrence. In the front of the co. is a chain of flourishing and interesting settlements. The population consists entirely of French Canadians.

Visit Saint-Michel-de-Bellechasse, Québec, Canada
Discover the people who lived there, the places they visited and the stories they shared. 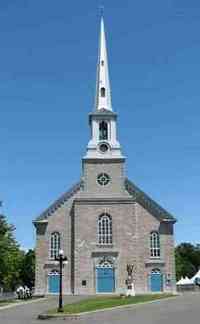