seigniory, in the co. of Nicolet, is bounded in front by the St. Lawrence; N.E. by the district line between Quebec and Three Rivers; S.W. by the S. of Gentilly: in the rear by the T. of Blandford. - 2 leagues in front by 4 in depth. Granted together with Isle Madame below the Island of Orleans, Apr. 27, 1683, to Sieur Levrard, and is now the property of A. Lanaudiere, Esq. and the Honourable F. Baby. - This seigniory is but very little settled, although the soil is fertile and yields good crops of grain. The soil is generally a fine clay mixed with a rich black mould. This S. is plentifully stocked with timber, some of which is of the best description, but much the greater proportion is cut for firewood, which is sent in large quantities to Quebec. It is watered by part of the Riviere du Chene and some small streams. In the first and second ranges of concessions are a few farms in a very improved state. The church of St. Pierre, the parsonage and a chapel are situated on the bank of the St. Lawrence, along which the main road passes.

Visit Saint-Pierre-les-Becquets, Québec, Canada
Discover the people who lived there, the places they visited and the stories they shared. 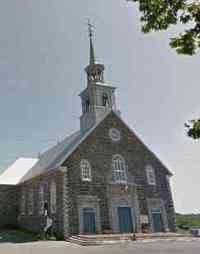