Baie St. Antoine, or Lefebvre, seignory, in the co. of Yamaska, is bounded S.W. by Lussaudiere, N.E. by Nicole and, in the rear, by Courval. - Two leagues in front and depth. - Granted Sept. 4th, 1683, to Sieur Lefebvre, and is now the property of Mr. Le Blanc. - This is in all respects a very productive tract of land; in the front the Longue Pointe, Pointe aux Pois and Pointe a la Garenne, all stretching boldly into the St. Lawrence, form the extremities of two large bays; to the E. of Pointe a la Garenne in the Baie du Febvre, als trenching deeply into the seignory. For some distance on the margin of these bays is a marsh that in the summer affords excellent pasture, singularly intersected in all directions by numerous small and clear rivulets, from which to the main road, crossing the seignory from E. to W., are some very rich and luxuriant meadows. From the main road the land continues a gradual elevation to the rear; the soil is mostly a fat clay or good black mould highly fertile. Except in the marshes and meadows, which have much inferior wood, the timber is of the best kinds. The river Nicolet, crossing a small part of the S.E. corner, is the only stream towards the back of the seignory. - About two-thirds of this property are under culture and can boast of some farms in a very flourishing state, particularly near the roadside. The want of water corn-mills is supplied by several wind-mills. The church is placed about the middle of the seignory on a rising ground, below which are several good houses, almost sufficient in number for form a respectable village; among them are two or three shops and a tavern, for which the situation is not ill chosen, as the place is a great thoroughfare. A main road strikes off towards the southern townships. In this 8,136 persons are employed in agriculture without receiving wages, and 61 are hired labourers, one quarter of whom would take new lands. - The farms are chiefly between two and three arpents in width. The population consists of native Canadians.

Visit Baie-du-Fèbvre, Québec, Canada (Saint-Antoine-de-la-Baie-du-Febvre)
Discover the people who lived there, the places they visited and the stories they shared. 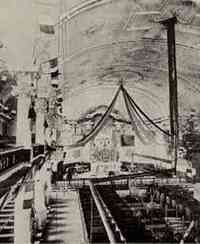