1901 - EVAN EVANS IS KILLED. Falls Between Cars at Union Grove and Dies of Injuries.

Recently Returned from Visit to Parents in Wales and Last Thoughts Were of Them.

Union Grove, Wis., Oct. 5. - {Special.} - EVAN EVANS, a conductor on a way freight on the Milwaukee road, running between Milwaukee and Freeport, Ill., was run over and killed this morning at Union Grove station. Evans had left his caboose to "go up ahead" to confer with the engineer. While running over the swaying freight cars the conductor slipped and fell. His head struck the rail and the wheels severed his right leg and one of his arms. Evans died shortly after the train had been brought to a standstill and members of the crew had picked up the injured man.

Evans' home was in Milwaukee, and he had recently returned from a visit to his parents in Wales. A few days ago he had been assigned a run on the Milwaukee and Freeport freight and this was his first trip. He was conscious when the trainmen picked him up and he fully realized the extent of his injuries, for when his comrades spoke of sidetracking the train and making a quick run to a station where medical assistance could be secured, he assured them that such a course was useless, for his injuries would prove fatal and all that remained was for them to make his last moments as easy as possible.

Just before the injured man expired he asked the train crew to send word to his parents in Wales that his last thoughts were of them.

Evans was about 35 years of age and had made his home in Milwaukee for many years. He resided at 3014 Mount Vernon avenue in that city.

Visit Union Grove, Wisconsin, USA
Discover the people who lived there, the places they visited and the stories they shared. 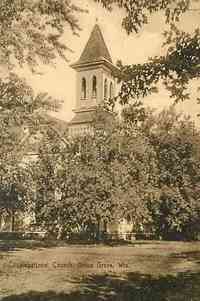