1936 - LIST OF DEAD IN TORNADO-RAVAGED GREENSBORO SWELLS TO 12; WORK OF RELIEF AND REHABILITATION SPEEDED. AT LEAST ONE MORE EXPECTED TO DIE TODAY.

Greensboro, April 3. - (AP) - The body of another negro man was taken today from the debris left by last night's tornado to swell the death toll to 12, with at least one other persons expected to die during the day.

Men armed with shovels, picks, axes, crowbars and aided by tractors dug into the ruins in all parts of the devastated area and searchers expressed the belief one or more other negroes had perished in the Five Points cafe where the body of ROBERT MITCHELL, 18, negro dishwasher of 211 Lewis street, was uncovered in mid-morning.
The storm was Greensboro's first recorded tornado and left in its wake damage estimated at upwards of $1,500,000 to a strip of business and residential property some 2 1/ 2 miles long and three to four blocks wide. More than 100 persons were injured.

Nearly Hits Business Heart.
Thousands of curious thronged the damaged sector of this city of 60,000 as the brunt of the tricky winds was borne by an area scarcely a quarter of a mile from the heart of the business section.

GARLAND JONES, 9, of 204 Hanley avenue, who was on his way to a religious service when the storm struck, was reported at St. Leo's hospital as having slight chance of living through the day. He suffered a fractured skull and other injuries when the automobile in which he was riding collapsed.

Fires followed the storm, despite a downpour of rain for a few minutes.

Three of the know dead were burned fatally. They were MRS. RUBY BAIN of 409 McAdoo avenue and MRS. J. B. AYERS and her daughter, GLORIA, 8, of 411 McAdoo avenue.

MRS. J. W. SPARROW, a daughter of MRS. BAIN, was trapped in her burning home with her mother, but was rescued.

The 400 block of Gorrell street and McAdoo avenue, just west, were the worst hit spots. Only one building of the eight in the Gorrell block was left on its foundations, seven were completely destroyed and in this area at least five were killed.

Electricity throughout the city was cut off after the storm struck and everything was black for three hours except for the light from flares, flashlights, lamps and candles.

Damage to industrial and business property was extensive.

The wind destroyed the buildings at the Sinclair plant but left the storage tanks undamaged.

The Blue Bell Overall company, located on South Elm street, was severely damaged and remained closed today, throwing some 700 workers out of employment.

"It was a horrible sight to see them drag my sister's mangled body from the ruins of that house," MRS. H. M. RAPER, industrial employe who lived at 406 Gorrell street, said this morning as she watched workers probing in the debris for the body of a negro man who was believed to have been trapped in the basement.

MRS. RAPER was at work when the tornado struck her home, arriving on the scene as workers recovered the body of her sister, MRS. VIOLA JOHNSON.

Husband Missing.
"I don't know where my husband is," MRS. RAPER said. "I haven't seen him since yesterday when the tornado struck."

The collapse of the home in which MRS. RAPER and MRS. JOHNSON lived also caused the death of MR. and MRS. JOHN MURPHY, who lived in part of it.

One undertaker whose place of business was next door to a negro cafe said he was certain there were at least three more persons buried in the ruins of the eating place.

The tornado did the usual tricks of such storms. It ripped out sections of roofs and did not damage other parts of the buildings in some places, then in others toke out side walls and left the roofs intact.

Pierced By Big Timbers.
Some buildings apparently untouched otherwise had been pierced by big timbers. Others looked as though someone had shingles from the roofs to leave holes here and there, with the main portion intact.
Big sheets of tin roofing were hanging from wires and tree limbs throughout the damaged sector.

Though thousands were thronging the scene in mid-morning the whole thing was a surprise to two men, they drove a truck into the congested area.

"Say mister, what's all this here about," one of them asked.

Visit Greensboro, North Carolina, USA
Discover the people who lived there, the places they visited and the stories they shared. 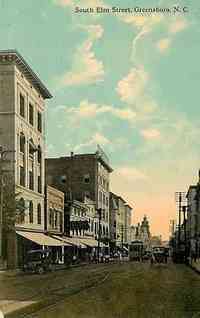