1910 - THREE KILLED IN A WRECK. Harvest Hands Stealing Ride in an Accident.

WICHITA, Kas., June 23. - Three men were killed and ten were injured in the wreck of an extra St. Louis & San Francisco freight train just east of here, at 2 o'clock this afternoon.

Two men are missing and are thought to be buried beneath the wreckage. All the killed and injured were harvest hands stealing a ride. The dead:

None of these are thought to be seriously injured.

These thirteen men were riding on the top of a heavy car of bridge timbers just back of a freight car. A broken flange caused the wreck. Two men were seen on top of the coal car at Leon, and it is believed they are beneath the wreckage.

Frisco traffic is being sent over the Santa Fe by way of Winfield tonight.

Visit Wichita, Kansas, USA
Discover the people who lived there, the places they visited and the stories they shared. 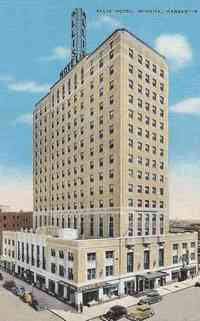