1909 - FUMES FILL MINE AND FIVE DIE. DEAD AND INJURED THROWN OVER ALL PARTS OF THE WORKINGS.

The explosion was caused by a windy shot, due to an overcharge of powder said to have been placed by JOHN PETIT.

PETIT is burned over his entire body and will die.

The dead were all killed by sulphuric fumes which followed the shot.
The mine was swept as if by a whirlwind.

Twenty-nine men were in the mine when the explosion occurred.
The rescuers found the dead, injured and suffering miners thrown over all portions of the west shaft.

All the dead and injured were identified as fast as brought from the mine cage.

The first intimation of the disaster to those on the surface was a terrific concussion which stopped the fan. Realizing what had occurred the engineer turned the full power on the fan and began filling the mine with fresh air.

At the bottom of the shaft GEORGE FARES a miner less dazed than his fellows opened a trap door allowing the air to reach the men in the north entry. These crawled along the floor to the shaft and were hoisted to the surface.

Immediately the work of rescue was begun. Sixteen miners who were lowered into the shaft were almost overcome by the fumes. They remained at their task however, sending the wounded to the surface where ambulances were waiting.

By 3:30 the body of the last victim, JOSEPH SCHENCK, president of the local miners' union, had been brought to the surface.

Visit Evansville, Indiana, USA
Discover the people who lived there, the places they visited and the stories they shared. 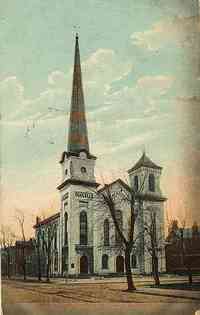