1962 - MINE EXPLOSION KILLS ALL 11 BELOW GROUND. RESCUERS WORK THROUGH NIGHT TO FIND BODIES.

Carterville, Ill. - An explosion ripped through the Blue Blaze Coal Co.'s No. 2 mine northeast of Carterville at about 6:30 p.m. Wednesday, killing all 11 underground workers.

Rescue teams who toiled all night in sub-zero weather began the grim task of removing the bodies this morning.

The second shift workers apparently died instantly when the blast rocked the mine about three hours after they went down the 165-foot shaft. One of the bodies was found at the bottom of the shaft, two others were nearby, and the other eight were near an air vent about 500 feet from the shaft.

The force of the explosion hurled bits of wood metal and a thick cloud of dust out the mouth of the shaft, damaging the lower portions of the tipple.

Debris was scattered over an area in a radius of 50 yards from the shaft, and a car window 30 yards away was smashed.

Claude Gentry, Carterville, is owner of the mine.

State mine inspector Ray McCluskey, Carterville, said Wednesday the explosion "must have been caused by gas. That's what I'd have to say tentatively."

McCluskey said definite determination of the cause would have to await results of an intensive investigation being conducted by state and federal officials.

Mine experts at the scene said the cold weather may have compressed a pocket of methane, deadly mine gas, causing it to be extremely volatile. McCluskey said it was possible that the workers hit a flaw containing the gas in the eight-foot vein they were working.

McCluskey said the mine was damp and had been rock dusted, which he said eliminated possibility of a dust blast. No explosives were used below the surface, mine officials said.

Tests for gas are made twice daily, and workers carry safety lamps which warn of dangerous levels of gas. McCluskey said he tested the mine himself Monday and it was "well below the safe level."

"They must have hit something all of a sudden," he said.

Three above ground employes were not injured in the blast. EVERETT YEWELL, Cambria, who was working in the tipple, said "things shook like everything up there" when the explosion occurred.

"The coal dust and smoke was so thick I couldn't see anything for five minutes."

Rescue workers began arriving at the scene within minutes, and before the night ended, over 100 men from police, fire department and rescue squads were on hand.

Visit Carterville, Illinois, USA
Discover the people who lived there, the places they visited and the stories they shared. 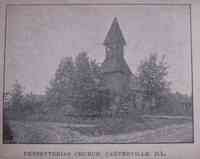