Birmingham, Ala., Dec. 11. - Twenty-six bodies were brought up from the recesses of the Overton mine No. 2 this morning, bringing the total removed to 48. Mine officials and rescue workers believe that five bodies still remain in the mine, and have abandoned all hope that the remainder of the men would be found alive.

Mine officials expressed the belief that the total death list would not exceed 53, as they estimated that all bodies except five had been recovered.

Rescue crews worked patiently all night and continued their labors today hoping to remove before nightfall the remaining bodies.
Cause Is Unknown.

The Overton mine is the property of the Alabama Fuel and Iron company and is considered by federal and state mine officials one of the best equipped in the Alabama field. The blast did not wreck the air machinery, and this aided the rescue party.

The cause of the blast had not been officially determined. Some of the mine workers believed it was caused by a miner striking a match which is forbidden, or by a "windy" shot.

It is believed that most of the bodies unrecovered are those of negro workers.

Relatives of the victims were not allowed to view the bodies.

Identification was being carried out with greatest difficulty.

Dragged Out By Mule.
Wearied watchers kept an all night vigil about the pit's mouth. The color line was obliterated. White and negro were united in a common grief, and each tried to assume the other's loss. Rain began falling at daybreak but women hoping to find their loved ones yet alive, never budged from the guard lines.

A negro miner owes his escape to his mule. Back somewhere in the pit when the gas was worst and conditions appeared darkest for the entombed men, out through the slope opening flashed a big fat mule. Clinging to the mule's tail was the negro who had become temporarily blinded by the blast and took this means of saving himself. He said he knew the mule would "get out if there was any getting."

The work of rescue practically completed, the sorrowing community turned to burial of its dead and the help it might give the bereaved.
Of the fifty-three men killed outright, only two were unmarried and most of them were parents of large families. Among the victims was Rev. A. C. COLLINS, a negro minister.

Haggard and worn, CHARLES DEBARDELD, president of the Alabama Fuel and Iron Company, which owns the property, stopped for a short rest period at noon after having led the work of rescue for 20 hours.

Visit Birmingham, Alabama, USA
Discover the people who lived there, the places they visited and the stories they shared. 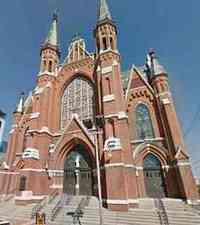