IMMENSE CROWD MADE IT IMPOSSIBLE FOR AID TO REACH INJURED AT ONCE.

Dallas, May 30. - Four persons were killed, two of them instantly, when a wooden awning, suspended by chains in front of a store in the heart of the business district, collapsed late this afternoon while an immense crowd was witnessing a demonstration in favor of preparedness.
The dead:
ALBERT CANNON, aged about 40.
MRS. F. E. ALLEN, aged 70.
A. E. LOTT, aged 60.
MILDRED BUTLER, aged 12.

A score of others were injured, some probably fatally. The crowd watching the parade had surged forward at the approach of a band. Persons standing on the awning crowded near the edge, and under the increased weight the structure tore itself loose from the supporting chains and crashed to the ground. At least a ton of bricks and mortar followed from the wall behind. On account of the crowd it was impossible for several minutes to render aid to those injured. One of the dead died in a drug store nearby while another died in an ambulance.

The parade was considered one of the greatest popular demonstrations in the southwest. More than twenty-five thousand people, all marching, were in line, bearing American flags and banners with inscriptions favoring a larger army and navy. It required two hours and ten minutes to pass a given point.

Only those in the immediate neighborhood knew of the accident, and on account of the size of the crowd but few of the paraders were aware of the disaster. 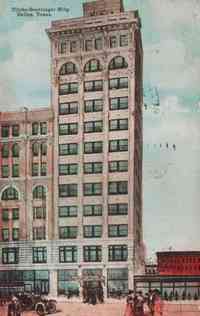