1889 - A TACOMA BUILDING COLLAPSES. A NUMBER OF PEOPLE KILLED AND SEVERAL BADLY INJURED.

Tacoma, May 14. - About 6 o'clock last evening a wind storm struck a building which was being constructed for a hotel. The structure collapsed, burying about twenty workmen in the debris. One hundred citizens and laborers just returning home from their day's work were soon at work endeavoring to rescue the imprisoned men. In a few minutes one body was taken out. It was that of WALTER BATES, who was building the hotel. The body of a working man named McCONNELL, and the bodies of two others, unknown, were taken out, and W. H. SNELL, city attorney, who received fatal injuries. The workmen rescued were severely injured, as was REV. McKEE, who had taken shelter in the building from the storm. The storm passed through the houses on that street, and when it struck a new store being erected between Eleventh and Thirteenth, it severely injured the workmen there. Another building in the southern portion was also demolished.

All over Puget Sound the storm is very severe. No other casualties on land or among the ships have been reported.

Visit Tacoma, Washington, USA
Discover the people who lived there, the places they visited and the stories they shared. 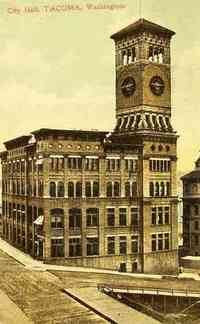