Waterbury, Conn., March 31. - Two people were killed and sixteen were injured in a head-on collision on the Naugatuck division of the New York, New Haven and Hartford railroad between a passenger train northbound to this city and a wildcat engine. Both engines were demolished and their boilers blown up, and the baggage car next to the passenger engine was telescoped. The other cars of the train did not leave the rails, but the passengers were injured by being thrown about by the shock of the collision.

The wreck occurred at a point in South Brooklyn where there is a sharp curve. The wildcat engine left Bridgeport early in the morning attached to a freight train and was on its way back, with orders to look out for the passenger train, when the collision took place.

Visit Brooklyn, Connecticut, USA
Discover the people who lived there, the places they visited and the stories they shared. 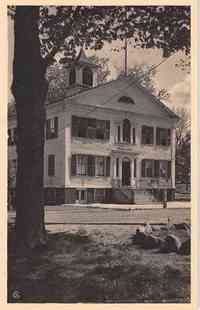