One Bolt Struck a Connecticut Schoolhouse and Shocked the Inmates.

Special to The New York Times.

WINSTED, Conn., April 12. - During a severe electrical storm which broke over East Litchfield and Harwinton yesterday afternoon lightning executed many queer pranks. A bolt struck the west district schoolhouse in Harwinton and shocked twenty children, three of whom were rendered unconscious. Miss Marion Pratt, daughter of John Pratt, was most seriously affected.

Two men driving from Torrington to East Litchfield were knocked insensible by a ball of fire. David Johnson, who was drawing wood near East Litchfield when the storm came up, says the air was heavily charged with electricity for several minutes. Lightning struck within a few feet of a herd of cattle owned by John Pratt of East Litchfield and covered the animals with mud. The fluid burned two strands of a barbed wire fence for a distance of thirty rods and left the third wire untouched. Examination failed to reveal a trace of the burned wire.

Telephones in the residences of William Wilson, D. C. Kilburn, and L. J. Goodman at East Litchfield were smashed to pieces.

Visit Harwinton, Connecticut, USA
Discover the people who lived there, the places they visited and the stories they shared. 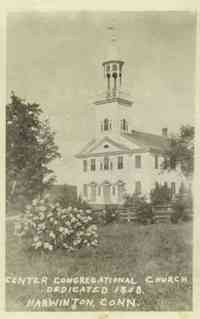