1903 - FACTORIES AND HOMES WRECKED AND MANY LIVES LOST. AS RESULT OF DYNAMITE AND POWDER EXPLOSIONS NEAR LOWELL, MASS.

TWENTY-FIVE PEOPLE ARE DEAD AND THE NUMBER OF INJURED ESTIMATED AT FIFTY OR MORE - EXPLOSIONS OCCURRED AT MILLS OF UNITED STATES CARTRIDGE CO. - MILITIA CALLED OUT.

Lowell, Mass., July 29. - An explosion destroyed the magazine of the United States Cartridge Co., located in Tewksbury, today, causing the death of probably 25 persons and injury to more than 50 others; set fire to a number of buildings in the vicinity and caused a general wreck of houses within a radius of half a mile.

The consussion was felt in Boston, 40 miles away, and at Exeter, New Hampshire, which is a greater distance from Lowell. At many points, a score of miles distant, window glasses were shattered and other damage done. In some cases there were reports in circulation that there had been an earthquake.

Panic Followed Explosion.
The city was thrown into a panic and it required every effort of the authorities to establish and maintain anything like order. It became necessary to summon four companies of the state militia. Alarming reports to the effect that over 100 persons had been killed and injured caused wide spread confusion. The explosion if thought to have been caused by the jarring of dynamite stored in the magazine by workmen who were laying a new floor.

The dynamite set off the powder stored in one chamber and that explosion was followed by another in a second chamber. The plant of the United States Cartridge Co., is located in a district, known as Riverside Park in Tewksbury, just outside of Lowell.

The building in which the explosion occurred, was a stone structure, about one and one half miles distant from the works of the cartridge company and within a distance of 50 yards are located half a dozen houses. Within a hundred yards, are 20 houses more and beyond that, the buildings are very close together. Every structure within a quarter of a mile was torn within and without.

Men and women and children, who were inside of the houses, sustained cuts, bruises, and broken bones, if they escaped with their lives. Men who lived in streets not far away, who were fortunate enough to escape serious injuries, immediately gave themselves over to work of removing women and children to places of safety for almost simultaneously with the explosion, came flames from several buildings. Into the flames and debris scores of men were soon plunging in efforts to save life and property. The wreck was so complete, however, that the work was harrowingly slow. The patrol wagons of the police and teams of all descriptions, were brought into use to supplement the hospital ambulances. It was nearly noon before anything like an accurate estimate of the number killed could be obtained. Previous reports had said that the dead would number 75, but at 11:45, a canvas of the hospitals and inquiry at the police station, resulted in a conservative estimate of 25 killed and 55 injured.

Sixteen victims most seriously hurt, were taken to St. John's hospital, where, at noon, it was said that four would die and that as many more were desperately hurt. The crowds increased momentarily, and it seemed as if all Lowell has suspended business, and was at the scene of the catastrophe.

Six bodies of men working near the powder store house, were recovered. It was some time before they could be identified, so badly were they disfigured.

On the way to the fire, numerous carriages were met that bore bleeding bodies of victims. Bodies were taken from the ruins and laid on the grass. Some were mangled beyond recognition. Men and women fainted at what they saw. The wreck caused by the explosion covers an extent of 3 acres. Houses, barns and outbuildings lay in a ruined state, some half demolished, others hardly more than a heap of broken timbers, still others were smoking from the recent fire, the prompt response of the fire department having enabled them to quench the flames which followed the explosion before they had extended beyond the buildings affected by the shock.

Visit Tewksbury, Massachusetts, USA
Discover the people who lived there, the places they visited and the stories they shared. 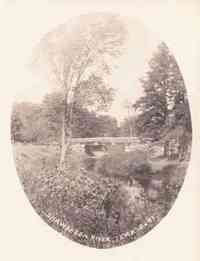