1894 - NORWAY, ME., ALMOST DESTROYED. VILLAGE HELPLESS IN A FIERCE FIRE WHICH SWEEPS THROUGH THE TOWN.

Norway, Me., May 9. - Fire was discovered about about 1:30 P.M. in the box shop of C. B. CUMMINGS, originating from a hot journal. The shop was situated on the west end of Main Street.

The fire quickly spread, and soon communicated to the Opera House, the finest block in the county, with two heavily stocked stores on the first floor.

The town being handicapped by the lack of a fire department, it was but a few minutes before the fierce gale which was blowing at the time carried the light, inflammable matter from the box shop to the very extreme eastern end of Main Street, a distance of nearly three-quarters of a mile.

The street was thickly populated, and some of the finest residences of the town were built in it.

Help was called from Lewiston and Portland, both of which places sent steamers.

Tonight almost the entire south side of Main Street is in ashes, but two or three houses remaining standing, and they are in a much damaged condition. The South Paris and Bethel Fire Departments arrived in good time and did good work.

During the time intervening between the breaking out of the fire and the arrival of help the villagers were helpless. The large number of streams necessary to cover the burning district greatly reduced the effectiveness of the water works system.

The houses of DR. FRENCH and DR. BARKER were burned, and their loss is about $4,000; insurance unknown.

The loss on all, according to Insurance Agent HOWE, will aggregate $300,000.

Major E. F. SMITH has called out Company D of the Second Regiment for service to guard the property.

Visit Norway, Maine, USA
Discover the people who lived there, the places they visited and the stories they shared. 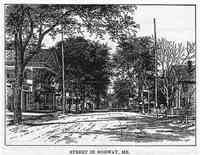