By The Associated Press.

Louiseville, Quebec, Aug. 15 - Two investigators were ordered tonight into the grade crossing accident here early today that killed 22 persons and injured 12 others, six seriously. The Canadian board of railway commissioners and the Quebec attorney general's department will look into the tragedy.

A large truck, loaded with 43 passengers, rolled onto the open, unobstructed crossing in the path of the racing locomotive as occupants of other cars, stationary on the highway, called out: "Don't pass! Don't pass!"

The truck was splintered. Bodies were catapulted dozens of feet onto the right-of-way, under the wheels of the freight train.
As it knifed through the mass of human forms, the locomotive applied its brakes. Brake shoes shrieked. A handful of spectators sat transfixed. Flung 90 feet and tossed into the ditch beside the right-of-way, the truck caught fire.

The occupants of the truck were returning from a late political meeting.

Apparently most of the dead were shot out of their shoes by the impact. Footwear littered the right-of-way.

Seventeen men and boys, some of them only 14 years old, were killed outright. A dozen others were injured. Five died. The rest, reaching instinctively to the threat of danger, jumped to safety in the precious moment before the collision.

Visit Louiseville, Maskinongé, Québec, Canada (Saint-Antoine-de-la-Rivière-du-Loup)
Discover the people who lived there, the places they visited and the stories they shared. 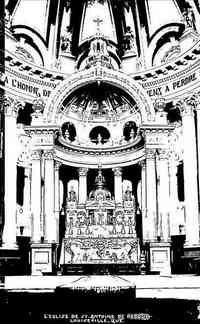