1902 - PRESIDENT ROOSEVELT MIRACULOUSLY ESCAPES DEATH FROM AN ELECTRIC CAR WHICH RUNS DOWN HIS CARRIAGE AND KILLS SECRET SERVICE AGENT.

EXECUTIVE CAUGHT IN WRECK AND BRUISED.

BRAVE GUARD AND THE DRIVER ARE MANGLED.

Pittsfield, Mass., Sept. 3. - The President of the United States escaped a tragic death by only a few feet in a collision between his carriage and an electric streetcar in this city today, while one of his most trusted guards, Secret Service Agent WILLIAM CRAIG, was instantly killed and DAVID J. PRATT of Dalton, who was guiding the horses attached to the vehicle, was seriously injured. President ROOSEVELT himself was badly shaken up, but received only a slight facial bruise.

Secretary CORTELYOU, who occupied a seat directly opposite the President in the carriage, sustained a minor wound on the back of his head and Governor CRANE, who sat beside the President, escaped without a scratch.

The carriage was demolished by the impact of the rapidly moving car and the wheel horse on the side nearest the car was killed. The crew and passengers of the car escaped injury.

The President and party were driving from this city to Lenox, through South Street, one of the principal thoroughfares of Pittsfield, which was lined with cheering people, and the catastrophe happened in plain view of hundreds whose happiness at the advent of the nation's chief was suddenly turned to grief.

Thousands had poured into the city in the early morning from the country to see and hear the President, and his address at the City Park had been loudly cheered. At the conclusion of the exercise he wished to make a brief call on former Senator Dawes, whose house in Elm Street is but a short distance from the park. The President's carriage, on which he had ridden in from Governor Crane's home at Dalton, was accordingly driven to the Dawes residence and carriages containing a number of other gentlemen in the party followed. President Roosevelt's call was a short one and then the carriage returned to the City Square.

After a few minutes delay the journey to Lenox was begun. Meanwhile the mounted escort of police officers and the carriages containing the newspaper correspondents, who have accompanied the President on his tour, had started off ahead on the road to Lenox and were some distance in advance of the President's equipage. Three or four other open carriages fell in line immediately behind the landau, in which the President rode with Secretary CORTELYOU and Governor CRANE. Secret Service Agent CRAIG, who, through the New England trip, has been almost constantly at the President's elbow, was on the driver's box beside Coachman PRATT.

Out through South Street is a broad highway. The tracks of the Pittsfield electric street railway are laid in the center of the road, with ample room for the teams on each side, and scores of vehicles of every description followed along this road behind the President's party. Shortly after he left the park an electric car which had been filled with passengers at that point started toward Lenox well behind the procession. It passed all of the teams and was about a mile and a half out from the city at the beginning of Howard Hill and was nearly up to the President's carriage, which was traveling on the west side of the highway.

Just at the foot of Howard Hill the road bends a little and teams are compelled to cross the street railway tracks to the east side. The railroad then continues alongside of the street instead of in the center. Just at this point the upgrade of the hill begins, and but a short distance beyond the crossing there is a narrow bridge spanning a small brook.

The trolley car approached the road crossing under a good head of speed, with gong clanging, just as the driver of the President's carriage turned his leaders to cross the tracks.

On each side of the executive's carriage rode two mounted troopers of the local cavalry company, and the horseman on the left for the landau had turned on to the track with the trolley car immediately behind him. Alarmed by the clanging gong, they both turned in their saddles and waved vigorously to the motorman to stop his car. Almost at the same instant Governor CRANE who quickly perceived the danger, rose to his feet and likewise motioned to the motorman.

The latter in great excitement desperately tried to stop his car, but it was too late. It crashed into the carriage as a loud moan went up from the frenzied on-lookers who thronged the roadside and who but a moment before were cheering the President.

The horsemen managed to get the frightened animals out of the way just in time, and the car struck the rear wheel of the carriage on the left side and plowed through to the front wheel of the vehicle, which received the full force of the blow. The carriage was upset and one horse fell dead on the tracks. The other three powerful grays attached to the vehicle started to run, and, dragged by them and pushed by the force of the car, the wrecked carriage was moved thirty or forty feet.

President ROOSEVELT, Governor CRANE and Secretary CORTELYOU were thrown together in the bottom of their carriage. Almost instantly a score of men jumped to the heads of the frightened horses and stopped their further progress. Governor CRANE was the first to get on his feet, escaping entirely unhurt. He turned immediately to the President, helped the latter to arise and together they assisted Secretary CORTELYOU.

The President's lip was cut and blood was flowing from the wound. His clothing was much disarranged and he was severely shaken up. Secretary CORTELYOU had a severe wound in the back of his head, from which blood was flowing freely. The President quickly regained his composure and the three soon after repaired to the residence of Charles R. Stevens, near the scene of the accident. CRAIG'S body was found just behind the car. His shoulders and chest were crushed and the body frightfully mangled.

Driver PRATT was found unconscious in the road. His shoulder was dislocated, his ankle sprained and his face badly cut and bruised. He was immediately placed in a carriage and taken to the House of Mercy, where he was attended by Doctors Flynn and Paddock who tonight say that he will recover.

CRAIG'S body was taken to the residence of Mrs. B. Stevens, adjoining the house which the President had occupied with Governor Crane and Secretary Cortelyou, and later was removed to undertaking rooms in this city. But a few moments after the collision, Drs. Colt, Thomas and Woodruff arrived and attended the President and his secretary.

Visit Pittsfield, Massachusetts, USA (Coltsville)
Discover the people who lived there, the places they visited and the stories they shared. 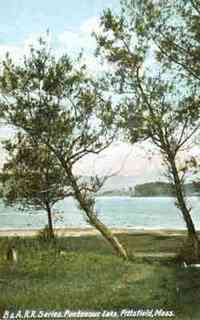 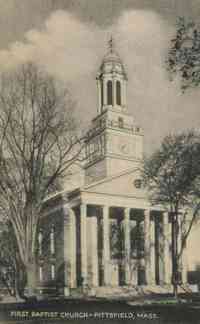