Am I Your Ancestor?
TAFT Family Genealogy

Daniel TAFT died 24 August 1761 in Mendon, Province of Massachusetts Bay.
Details of the family tree of Daniel appear below.

All public officials and attorneys in Kentucky must swear an oath that ...Read MORE...


Events, Pictures and Documents Related to the Genealogy of Daniel TAFT 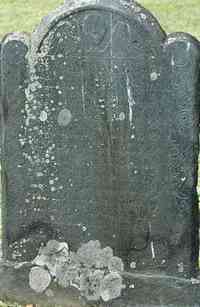 Daniel is buried at: Old Cemetery Mendon Worcester County Massachusetts, USA
Inscription:
In Memory Of Daniel
Taft, Esq. who departed
this life August 24 1761
in the 84th year of his Age
He sustained the office
{of} Magistrate near 40
{years} which such was
{his} conduct as

Genealogy research for Daniel Taft (on other sites)

Is Daniel TAFT YOUR Ancestor? Tell us more!

If you'd like to be contacted by others who are related to Daniel TAFT, leave a message here!
The comments you read here belong only to the person who posted them. We reserve the right to remove off-topic and inappropriate comments.