seigniory, with its augmentation, in the co. of Lotbiniere; bounded E. by Ste. Croix; W. by Deschaillons and its augmentation; in the rear by the townships of Somerset and Nelson; in front by the St. Lawrence. - This S. was granted in several parcels, viz. - Nov. 3rd, 1672, half a league in front by 1 1/ 2 in depth, on the W. side to the Sieur Marsolet. Nov. 3rd, 1672, 2 1/ 2 leagues in front by 2 in depth, adjoining Ste. Croix, to Sieur de Lotbiniere. April 1st, 1685, half a league in front by 2 leagues in depth to Sieur de Lotbiniere; being the vacant space between the two former grants. The augmentation, 3 1/ 2 leagues in front by four in depth, 25th Mar. 1693, to Sieur de Lotbiniere. The whole, being 3 1/ 2 leagues in front by 6 in depth, is now the property of Gustave Joly, Esq. - Ths oil in general is excellent and so advantageously varied, that every production of the country may be raised. It is well stocked with fine elm, ash, maple, beech, plane, wild cherry and other timber: the banks of the rivers du Chene, Huron and Boiselere produce pine of first rate growth. This S. is very well watered by these three rivers: the first is navigable at all times as far as the place called the portage, distant about two miles from the St. Lawrence; but the two latter only during the rise of waters in spring and autumn. Notwithstanding the superior fertility of the soil, about one-sixth part only of the grants are settled. There are seven ranges of concessions parallel to the St. Lawrence, and one perpendicular to it, which contain 580 farms, of 3 acres in front by 30 in depth; of this number, 465, under the management of industrious tenants, who are good cultivators, yield abundant crops of grain, &c. Near the middle of the front stand a handsome stone church and parsonage-house, and near to them a few neat and well-built houses. On the E. side, near the St. Lawrence, is a small domain of only twelve acres, wholly uncultivated, thickly clothed with timber-trees of a superior description, and containing the seignorial mill. On the different streams are six saw-mills, and five manufactories of potash. - All the roads in the S., as well as the main road along the St. Lawrence, are always kept in excellent repair.

Visit Lotbinière, Québec, Canada (Saint-Louis)
Discover the people who lived there, the places they visited and the stories they shared. 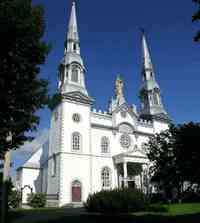