Two of the victims who perished when fire destroyed the Weskora Hotel in Ossining yesterday, were positively identified today as MRS. ELLA FOX, of 624 North Salina Street, Syracuse, and GEORGE E. McKENNA, of Bristol, Conn., who also was known here.

Identification in the case of the woman was first established.

Ossining police told The Herald over the long distance telephone, when a charred letter bearing her name and address was discovered.

HAROLD FOX, her husband, who left Syracuse last night, today, the police stated, was unable to make positive identification because of the condition of the body. He said the size however, resembled his wife and that he was satisfied regarding her identity.

They said MRS. FOX had been visiting in New York City. They had no knowledge, they stated, that she was in Ossining.

Members of the FOX family here said they did not know McKENNA. He and MRS. FOX registered at the hotel at about the same time. The register was destroyed in the fire, which made difficult the task of identifying the victims.

McKENNA was identified, according to Associated Press dispatches from Bristol, Conn., by FRANK S. JONES, his father-in-law. McKENNA'S car was found unclaimed in Ossining.

McKENNA was 35 and was employed as a salesman for a brush concern. He made frequent visits in Syracuse in that capacity.

He is survived by his widow and a son, 4 years old.

ALBERT ALBRECHT, a waiter, also perished in the fire.

Ossining police, believing the fire to be the work of an incendiary, today are continuing an investigation. Guests declared they saw a negro run from the building shortly before the flames were discovered.

Visit Ossining, New York, USA (Sing Sing)
Discover the people who lived there, the places they visited and the stories they shared. 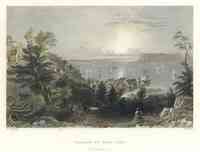