Augusta, Ga., March 23. - Twenty blocks in the residence section of Augusta in charred ruins, the bared walls of six business blocks bear testimony today of Augusta's most serious fire disaster of recent years. Upwards of 700 houses were destroyed and at least 3,000 persons are homeless. The fire which raged for more than nine hours last night, causing a loss estimated at from $5,000,000 to &7,000,000, was brought to a halt early today after it had crossed Green street.
An area of about one and one-fourth square miles was ravaged by the flames which were driven by a heavy gale. The Augusta firemen were powerless and fire apparatus was sent from Columbia, Charleston, Atlanta, Macon, Savannah and Waynesboro.

The wind subsided just after on o'clock and it was not until then that the firemen could gain in their fight.

Leading citizens of Augusta early today began to lay relief plans. The city council was called to consider necessary action and a general mass meeting of citizens was called.

Three companies of the National Guard of Georgia were patrolling the streets during the entire night and a strict watch was kept today on the devastated district. No reports of looting have been received by officers.

There were many narrow escapes, but no one was seriously injured. Several firemen have been sent to the hospital suffering from burns and bruises.

Officials of the fire department today began an investigation into the cause of the fire, but as yet no explanation has been offered.
In the flame-swept area were the city's largest offices and business buildings on the north side of Broad street; warehouses on historic "Cotton Row" containing thousands of bales of cotton, and some six hundred homes, many of them in the city's most exclusive residence section. Among other structures destroyed was St. Paul's Episcopal church, built 135 years ago.

Hotels and homes in the sections of the city not reached by the fire were thrown open to those whose residences were burned, and steps were being taken by local authorities to give relief to the 3,000 persons who had lost their homes. Warm weather saved them suffering last night, as it did several thousand more who moved their belongings into the streets, fearing the flames might reach their houses.

Just as the fire was being gotten under control, another fire caused $12,000 loss in the southern part of the city, burning several houses and a grocery store.

The loss to the Empire Life Insurance building, a partly completed structure, is estimated at $75,000 to $100,000. It however, was not destroyed. Fire fighting equipment was brought from half a dozen other cities, but it necessarily came late and in the meantime high winds had rendered the local companies helpless.

Visit Augusta, Georgia, USA
Discover the people who lived there, the places they visited and the stories they shared. 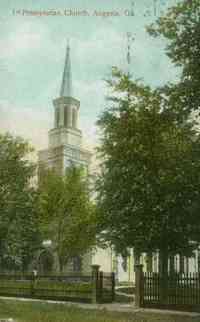